A revealing portrait of UK voters’ scepticism about the EU

A cross-border poll by Opinium, due to be launched tomorrow, of voters in the UK, France, Germany and Poland, as well as British business executives, tells a familiar story about UK voters’ attitudes to the EU: they feel the costs outweigh the benefits. 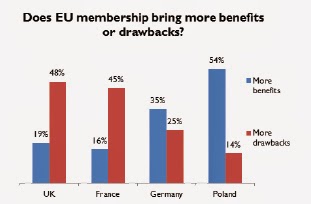 UK business respondents were more likely to say EU membership is a good thing (47% versus just 26% of UK adults generally) and that it has more benefits than drawbacks (40% saying more benefits versus 19% of UK adults). Although the picture is mixed. Business respondents were evenly split on whether to vote in or out in a referendum but 38% thought the UK economy would be better off if Britain left the EU versus 31% who said the economy would be worse off.

The pollsters note that, “While people in the UK see the benefits of some areas of EU membership (specifically the lack of customs duties or tariffs, easing restrictions for businesses, tourism and travel), these are all overshadowed by the overwhelming majority saying that EU membership has had a negative effect on immigration to the UK.”

But perhaps the most striking comparison is how Brits and voters from the other countries polled emotionally or culturally identify with Europe. 50% of the British public feel the UK is “not European”. In Germany the figure is just 11%: 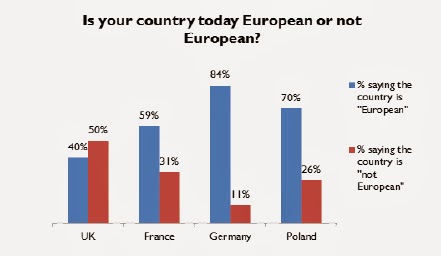 This illustrates that, for the British public, the processes and mechanisms of the EU are as controversial as specific EU policies. This is why systemic change to the EU (such as an effective red card for national parliaments) is so important.

Despite these cultural differences, when asked how much or little EU integration they would like, the most popular option among voters in every country was: “Some matters are handled by the EU but countries are able to opt-out and use national vetoes to protect their interests”:

So there is support in the UK and some of the other key member states for a more flexible model of EU membership. However, the large number of ‘don’t knows’ among UK voters and their emotional ambivalence about the European project would suggest that wining support for a new deal in a referendum won’t be straightforward, particularly unless the reform is substantial.