What’s the best place to publish an ECB letter setting out your country’s economic policies? 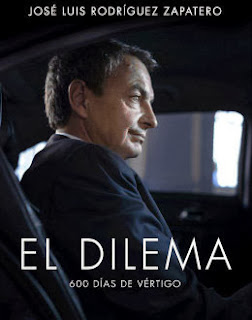 Former Spanish Socialist Prime Minister José Luis Rodríguez Zapatero has upset quite a few people after he included the letter he received from the ECB and the Bank of Spain in August 2011 in his recently published memoirs. Though bits and pieces of the letter had already been disclosed, the full content was never really made public. In a radio interview today, Zapatero has justified his decision to keep the content of the message secret at the time because at least part of it “would have put stability at risk”.

Courtesy of El País, we have had a look at the letter – and we thought it was worth translating a few key points:

Therefore, as in the case of Italy (see our blog post from September 2011), the letter was a lot more than just a push to shape up. It was a detailed and quite prescriptive to-do list in return for ECB bond-buying – even boiling down to specific policy measures and the size of fiscal cuts. Furthermore, it did not shy away from touching on politically sensitive issues for Spain – just think of the demand for more central control over regional spending or the abolition of wage indexation.

All this put the ECB squarely in the realm of domestic fiscal policy, somewhere many would agree it should not be. In any case, any country considering applying for an OMT bond-buying programme should consider these points when wondering how prescriptive the conditionality might be.

The closing paragraph of the letter sounds a lot like a warning. It reads, “We are confident that the [Spanish] government is aware of its highest responsibility in the good functioning of the eurozone in the current [economic] conjunction, and that it will adopt in a decisive manner the necessary measures to regain the confidence of the markets in the sustainability of its policies. Such measures […] should greatly benefit not only the Spanish economy, but also the eurozone as a whole.”

Therefore, it is no surprise that many of the letter’s ‘suggestions’ have become government policy – though under the centre-right cabinet led by Mariano Rajoy, who took office at the end of 2011.