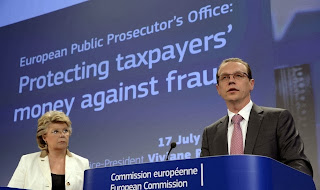 While all eyes are on EU free movement and EU migrant’s rights to welfare access, the Commission has put out its response to the ‘yellow card’ shown by national parliaments with respect to its proposal for a European Public Prosecutor’s Office (EPPO) – a body which would “investigate and prosecute EU-fraud and other crimes affecting the Union’s financial interests”.

To re-cap, national parliaments in eleven member states – the UK, Czech Republic, Cyprus, France, Hungary, Ireland, Malta, Netherlands, Sweden, Romania and Slovenia – complained that the plans breached the subsidiarity principle – i.e. the principle that the EU should not act where member states are just as able to act on their own. This is only the second occasion on which the yellow card has been deployed.

The weakness in the current system is that a yellow card only compels the Commission to consider whether to “maintain, amend or withdraw the proposal”, meaning that if the Commission is determined to push ahead regardless, it can do so. This is is exactly what has happened in this case, with the Commission concluding that the “proposal complies with the principle of subsidiarity… and that a withdrawal or an amendment of that proposal is not required.”

The actual document is very detailed, and while its good that the Commission has properly engaged with concerns raised by national parliaments, it is clear that the Commission’s mind is already made up as per the following section:

“the drafters of the Treaty have expressly provided for the possibility of establishing the European Public Prosecutor’s Office in Article 86 TFEU… This provision gives a strong indication that the establishment of the European Public Prosecutor’s Office cannot be considered per se and in the abstract to be in breach of the principle of subsidiarity.”

Very tellingly, the Commission has also appointed itself as the arbiter of what constitutes an ‘acceptable’ complaint on subsidiarity grounds, arguing that:

Although the Treaty states the decision has to be reached by unanimity (so no danger of the UK being vetoed), this episode highlights the need to turn the ‘yellow card’ into an outright ‘red card’ – i.e. a definite veto. This could apply to existing as well as proposed EU legislation.