Will the European Commission challenge Cameron’s crack-down on EU migrants’ access to benefits?

We have just published a new flash analysis looking at David Cameron’s plans to change the rules on EU migrants’ access to benefits.

Here’s a handy table (click to enlarge) summarising the key proposals, and whether they are likely to be deemed legal by the European Commission: 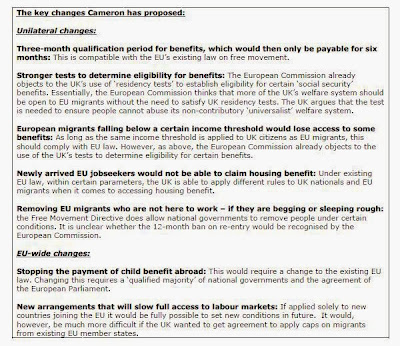 So whether the European Commission will  take the UK to court will very much depend on, how, exactly the measures are implemented. Interestingly, so far the Commission has stayed clear of openly saying the measures are illegal, and of course, the UK government will have sought to ground this with both its own lawyers and EU ones.

However, remember, the UK is already locked into an ongoing legal dispute with the Commission over the rights of EU migrants to access the UK’s ‘universalist’ welfare system. Cameron’s recent intervention signifies a definite hardening of tone and position in this dispute, and in response EU Social Affairs Commissioner Laszlo Andor has said that the UK risks being seen as a “nasty country.”

As we have said before (see here, here and here, for instance), we think the Commission has a tendency to be overly activist in this area. However,  the key issues here – which Cameron could have done a better job of expressing in his intervention –  is that the EU’s complicated and outdated rules on access to welfare need a complete overhaul, something which the Austrians, Dutch and Germans have already signalled their support for.