A hint as to what a eurozone grand bargain could look like? 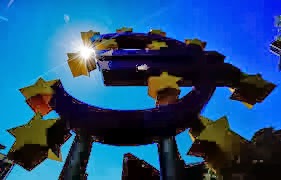 German coalition talks are dragging on, but we may have got a hint as to what a grand bargain between the eurozone north and south might look like, with German Chancellor Angela Merkel again appearing to open up for an EU Treaty change.

“Germany is ready to develop the treaties still further. At the very least we have to be ready to improve the euro protocol of the Lisbon Treaty – which only applies to euro states – to allow an institutional co-operation via the so-called community method and not to only be active at intergovernmental level.”

She proposed a “new co-operation” between the European Commission and member states, with the policy recommendations being the result of negotiations.

“In this way we create a sense of ownership, a sense of responsibility is created among member states to implement necessary change. That’s what I understand by economic co-ordination.”

As we’ve argued before, it’s easy to get sustained whiplash injuries from tracking the German position on EU treaty change, but this (again) sounds like ‘reform contracts’ or ‘competitiveness pacts’ to us – which we have long argued would come back on the agenda – with the European Commission acting as the ‘structural reform police’.

Meanwhile, in an interview with Les Echos and other European papers, Eurogroup Chairman Jeroen Dijsselbloem also had some interesting things to say:

“If a country is not persuaded that it’s in its own interest to reform and modernise, it cannot be motivated from outside. It doesn’t seem wise to me to propose a ‘reward’ in return for a reform. Instead, I think one should link the concession of additional time to correct budget deficits to stricter conditions in terms of reform. I give you more time if you speed [reforms] up. The European Commission may, if a country fails to do so, demand more on budget [adjustment].”

A lot to play for…