As with many things in the eurozone crisis, we have now come full circle in the discussion of one part of ECB policy – the prospect of Quantitative Easing (QE).

The debate over ECB QE was had when the crisis was at its peak. The motivating factor then was ensuring the euro stayed together. Now the motivating factor is low inflation/fear of deflation and low growth. The ultimate conclusion back then was that QE is not the right policy for the ECB (compared to the Fed or the BoE) for a number of practical and political reasons.

Despite the current motivation behind the debate being different, we think the key constraints still hold, while other issues over the effectiveness of QE have also come into play. Our previous thoughts are here. Below we restate our points and add some new insights.

Hard to target QE on the necessary sovereign debt: As we stressed in our previous post and note on this, any QE in terms of direct primary market purchases of eurozone sovereign debt would have to be shared out according to each countries share of ECB capital – i.e. Germany and France would see the large majority of purchases. This significantly limits any real benefit in the periphery and could worsen the crunch for safe assets in the eurozone with the price of core eurozone sovereign debt being driven even higher (and the returns going further down). The hope would be that this would spur investment in the periphery countries but given the investment patterns in Europe and the upcoming stress tests, it’s clear that demand for periphery debt remains separate from demand for core debt.

QE is very different to OMT: The exact constraints for OMT remain ill defined, but what we do know is that any purchases will be limited to short term (below 3 year maturity) debt on the secondary market, will be subject to the strict constraints of a bailout programme and the purchases will be sterilised.  What form a QE programme would take is also unclear, however, it is likely to involve significant and widespread purchases which come with no conditions and are not sterilised. 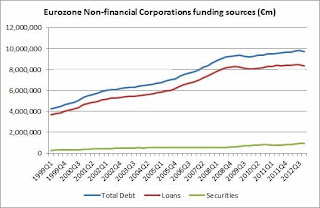 QE on private assets might have little impact in Europe: Unlike the US and even the UK, the European market for securities is far less developed. Furthermore, the corporate sector relies much more heavily on bank loans for funding than on debt issuance (see graph to the right). If the ECB decided on a QE programme to target different securities, the impact on the real economy would be limited by the structure of these markets. This point is driven home by the graph to the right below, which highlights the broad breakdown of assets in the eurozone – significantly dominated by government debt. The ECB could purchase mortgage backed securities, which is one of the more developed markets. However, a significant chunk remain non-performing (or close) and are opaque in terms of what is included inside them and what their true market price is. In all likelihood any purchasing of private sector assets would mostly be a boost to bank balance sheets, however, unless it is sufficient to completely reverse their deleveraging and kick start lending it would probably do more than push up asset prices. 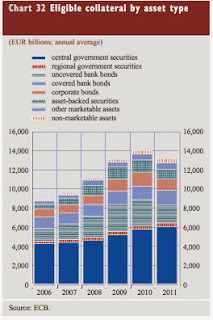 Political obstacles are significant: The programme would need approval in the ECB’s Governing Council. With a quarter already known to be against last month’s rate cut, opposition to such a significant step could grow. Even if it got through the fallout in terms of divisions within the ECB and the political blowback from within Germany could create serious problems for the eurozone. Bundesbank President Jens Weidmann even said earlier today that the ECB should not take further easing steps in the near future after the rate cut.

The overall impact on the real economy is far from clear: the discussion over this point in the US and UK has been substantial, with no clear winner. While QE did likely help to avert a deeper crisis, particularly in the short term, the fact is that there is no clear link between higher inflation or higher growth and asset purchases of the central banks.

For these reasons, we believe QE will be a very last resort for the ECB. It is practically and politically difficult. That said, it still seems like further easing is very much being considered. See for example the Bloomberg story today about the very real possibility of a negative deposit rate (which has weakened the euro significantly). Such a move would itself of course come with drawbacks and difficulties, but we’ll leave them for another post.