The Times’ Juliet Samuel has an interesting story today looking at the progress on bank bail-in rules and resolution funds at the EU level (via some leaked docs relating to the EU’s Bank Recovery and Resolution Directive).

Despite another round of meetings little progress seems to have been made in finalising the format of the resolution authority or the fund it would use to aid banks, i.e. the creation of the second pillar of the banking union – although there does seem to be a move to increasing the direct involvement of national authorities. Germany also looks to have conceded somewhat on using the ESM, the eurozone bailout fund, to aid banks as agreed over the summer. But given that this will still require a change in German law and approval in the Bundestag to activate it, the hurdles remain very high.

With this in mind the internal Commission assessment (which can be found in full here) raises some interesting points (it’s worth keeping in mind the the bail-in plans and banking union are separate but very closely related when it comes to questions of aiding banks). The paper essentially provides a comparison of the different bail-in approaches favoured by the European Commission (EC), the Council and the European Parliament (EP). The EC proposal sees a very strict bail-in structure with all levels of investors and uninsured depositors facing losses before resolution funds are tapped. The Council waters this down slightly, with some use of resolution funds at different stages. The EP goes further with greater protection of depositors and therefore more use of resolution funds (see graph below for a useful graphic on all this). 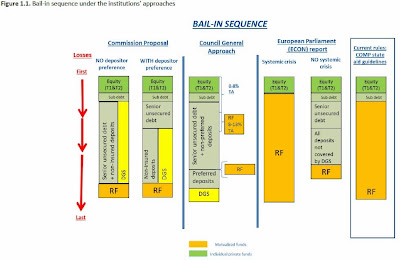 Although the analysis is significantly limited by numerous assumptions and data constraints, some interesting points can be gleaned, which we outline below:

Greater flexibility, leads to greater use of funds: The key point seems to be that any flexibility introduced into the bail-in system will significantly increase the level of resolution funds needed. Broadly, under the Council proposal this could reach €70bn under a 25% loss scenario. Under the EP structure the figure could top €200bn if there was a systemic crisis. These are rough figures gleaned from the numerous scenarios, but the message is a clear warning to the Council and Parliament about allowing too much flexibility from the planned bail-in rules.

Where would these funds come from? This is the obvious follow up. No plan is presented in the paper and the general idea is that they would be built up over time from taxes on the financial sector. But under the current plans this could take up to 10 years, from a start in 2018. What happens in between? There seems little choice but to infer that national taxpayer funds would be tapped if another crisis hit.

Bank investors and even depositors lined up to take big hits under bail-in: Another key feature of this paper is that, for the first time, it highlights the type of losses investors and depositors will face if a crisis hit under the bail-in rules. In nearly all scenarios, albeit to varying degrees, even senior debtors and uninsured depositors take large hits. As these discussions develop and the final structure becomes clearer the market will begin to reassess the pricing of different instruments – whether deposits, debt or other instruments are favoured could well affect bank funding structures.

Beyond these points there is little more significant to draw from the paper. It debatably raises as many questions as it answers – what will the final format be? When will it be introduced? How will any resolution funds be funded? Will this be done at the EU or eurozone level?

The motivation behind the paper is also worth considering. It’s clear the Commission is trying to send a bit of a message here, warning the Council and EP against watering down the bail-in plans too much – at least if they don’t want to put up significant resolution funds. Whether or not this will be taken to heart remains to be seen.