As expected, the European Commission today announced a review into Germany’s current account surplus under its Macroeconomic Imbalance Procedure (MIP).

This has been a topic of hot debate recently and has the potential to become a very important debate in the future of the euro and Germany’s role in it. We laid out our thoughts on the issue in a detailed post last week. We recommend re-reading it, but the thrust is that, while rebalancing is needed, boosting imports in Germany or cutting exports would do little to help the peripheral economies because they simply do not produce goods and services which Germany want and do not produce the same exports to replace Germany’s if it lost competitiveness.

That said, by the letter of the law the Commission was right to launch the procedure given that Germany has broken its threshold on the current account surplus (over 6% of GDP since 2007, see graph below). The key point is for the Commission to judge it on its merits not as a political process – to be fair the Commission itself stressed this point but there have been hints that it takes a bit of a dim view of the large surplus. 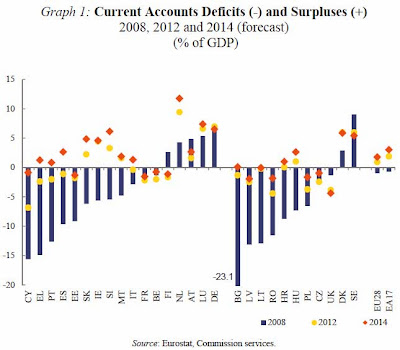 What happens now? It’s early days yet. The Commission will begin its review and complete it by spring next year. The recommendations will then be included in next year’s European Semester and country specific economic recommendations. The key will be how hard the Commission goes on the arguments and how Germany responds. If it fails to implement the reforms the Commission does have the option of imposing a fine or even sanctions on Germany.

Signs on this front so far show the potential for conflict. German reactions have already been quite hostile with CSU General Secretary Alexander Dobrindt warning that, “You don’t strengthen Europe by weakening Germany” and CDU General Secretary Hermann Gröhe adding, “Our export strength is the corner stone of our prosperity”. Bundesbank President Jens Weidmann added that expanding Germany fiscal policy is also not the answer, saying, “The positive knock-on effects would be limited”.

There are also a few points in the Commission’s report which are worth picking up on:

Emphasis on euro strength: Numerous times the report argues that Germany’s long standing surplus is helping push up the euro exchange rate, making the periphery’s adjustment harder. This seems a strange point to focus on given that it’s not Germany’s job to manage the exchange rate. There are also plenty of other factors which influence the euro, including but not limited to: actions of other central banks (notably the Fed weakening the dollar) and the repatriation of funds to Europe as banks and business refocus on core European operations. The report also says that Germany’s real effective exchange rate (REER) has come down due to a weaker euro, which seems a tad contradictory.

Causality between deficits and surpluses: The Commission highlights that defining a clear link between one country’s deficit and another’s surplus is not as simple as first seems. This is a point we made in our previous blog. While Germany may have previously been the flip side of other countries deficits, these deficits have now closed and Germany has maintained a surplus by trading with non-euro countries. The Commission also notes that countries such as Germany can play a key role in the supply chain – this means its exports create demand of imports of inputs from other countries, it also highlights that Germany is not always the source of the final demand for imports. The German government itself flagged this up, saying that “40%” of its exports rely on intermediate goods imported from EU partners.

Germany did play a role in previous peripheral deficits: As mentioned above Germany did play a role in sustaining the large deficits in the peripheral countries which helped cause the crisis. However, as touched upon in the report, this is more a failure of supervision (both financial and macroeconomic) and a failure on the part of the periphery to invest the money into factors which would promote long term economic growth. After all these investments were helping to drive significant growth at the time and these countries did reap some benefits, but failed to make them lasting. This dynamic was also almost inevitable as a result of pushing such different economies into a single interest and exchange rate policy.

Germany has troubling demographics: Countries such as Germany, with an ageing population, are always going to be inclined to save more. Judging what level of saving is warranted or needed given such constraints is tough, but it’s clear that German businesses and people have already made up their mind to save more.

Germany does need to unblock obstacles to domestic demand: The report is correct to highlight that Germany can do more to promote demand, notably by liberalising its services sector and reducing the level of taxation.

Germany above the threshold for public debt: the Commission will review this imbalance as well, highlighting constraints to any demands for further public spending.

All in all, the Commission does try to cover both sides of the argument but the tone still seems to lean towards asking Germany to do more to boost demand. If this is through liberalising measures it will be welcome (at least by us), however, if it calls further jumps in spending and wages it could find a very hostile reception in Germany.

In any case, the scene is set for what could become a crucial debate over the structure of the euro. The crux of the argument comes down to – what is Germany expected to do to save/aid the euro and what is it willing and able to do (politically, legally and economically)?