This could be huge: Germany’s fledgling coalition considers its own “referendum lock” 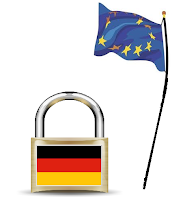 As we point out in today’s press summary, the German media is abuzz with reports that a proposal has been tabled in the on-going Grand Coalition talks between the CDU/CSU and SPD on encouraging more “direct democracy” via national referenda, including on the transfer of new powers to the EU. Details remain unclear, but this looks similar to the UK’s own “referendum lock,” which provides for automatic public votes in many (but not all) cases of powers being transferred from Westminster to Brussels.

Süddeutsche Zeitung reports that a CDU/CSU and SPD working group (lead by the CSU’s incumbent Interior Minister Hans-Peter Friedrich and the SPD’s Thomas Oppermann), has prepared a draft paper, which states that people should “be directly consulted on European policy decisions of special importance” and that this should apply in particular to:

“the accession of new Member States, important competences being transferred to Brussels or Germany’s financial contributions at the EU level – for this, we want to provide nationwide referendums.”

The CSU campaigned for the introduction of referenda on important European policy decisions during the election, while the SPD has, in principle, been in favour of direct democracy for some time. While the CDU is somewhat more sceptical, there is still support for this idea within the party’s own ranks. Schäuble last year floated the idea of a referendum on a new constitution.

In other word, this could mean referenda on:
If this becomes part of the Coalition agreement it would be hugely significant. Germany, a country historically allergic to referenda, will have one of the strictest regimes with respect to public EU-related votes in Europe. More to the point, as revealed by our own polling, it’s very hard to see how it would be possible to get, say, fiscal transfers voted through by the public (though even without the commitment, changing the German Constitution could require a referendum as per Schäuble’s suggestion). Significant transfers of powers could also be blocked by public opposition.
The big difference between this and the UK’s referendum lock is that the German one would also apply to future enlargements. That would be a de facto massive block on a future Turkish accession, for example.
Still far from certain the idea will materialise in the end but it’s definitely one to watch.
Author : Open Europe blog team
Print