US and Germany trade blows over macro policy, but is Germany’s export focus really to blame for the woes of the eurozone?

Another dispute arose last week between the US and Germany. This time on macroeconomics. Maybe not quite as glamorous (or controversial) as spying, but interesting nonetheless. The new disagreement was set off by the US Treasury’s semi-annual Report on International Economic and Exchange Rate Policies which said (and reiterated numerous times):

“Germany has maintained a large current account surplus throughout the euro area financial crisis…Germany’s anaemic pace of domestic demand growth and dependence on exports have hampered rebalancing at a time when many other euro-area countries have been under severe pressure to curb demand and compress imports in order to promote adjustment. The net result has been a deflationary bias for the euro area”.

Germany (unsurprisingly) took offence to this and hit back that its surplus was simply a result of competitiveness and global demand for German products.

Numerous commentators have weighed in to add to the criticism of Germany with Paul Krugman, Martin Wolf, the Atlantic and the Economist Free Exchange blog all lambasting Germany, albeit to varying to degrees. (See Bruegel here for a good round up). The WSJ‘s Richard Barley attempts to provide some much needed balance to the discussion.

The thrust of the argument is: Germany should boost domestic demand to provide a demand boost for the struggling eurozone economies (via imports). It should also allow wages and prices to rise (reflate) to reduce its advantage over these other countries, allowing them to take over some of Germany’s market share.

So, who is in the right? We’ll leave that up to you to decide, but we do feel the debate has been rather one sided in its criticism of Germany. With that in mind, below are a few points to ponder.

1) Germany is not as big a source of demand for peripheral economies as assumed: As we have noted before, the assumption that if Germany imported more, the peripheral countries would benefit seems overstated. We have already pointed out that the eurozone and particularly the periphery make up a declining source of Germany’s trade. 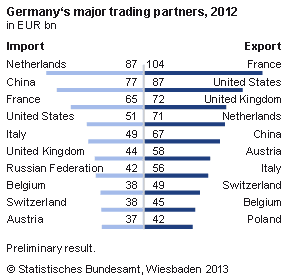 Importantly, Germany is also a limited source of demand for these countries. In 2012 exports to Germany from Greece, Italy, Portugal and Spain amounted to 0.9%, 3%, 2.9% and 2.25% of their GDPs respectively. So, if Germany did boost its domestic demand and consumption only a small amount would filter through to imports from these countries and this would amount to a very small boost in GDP. To have any real impact then, Germany would consciously need to direct an increase in imports from these countries – not a realistic proposition. Also, keep in mind as well that it could do little to offset the massive collapse in domestic demand, investment and government spending which in many cases amount to double digit percentages of GDP.

2) ECB’s one-size-fits-all policy: As the Economist Free Exchange blog points out, the issue of reflating probably has as much to do with the ECB as it does with Germany. But as we have pointed out the ECB faces a tough time in tackling low growth and low inflation due to numerous technical, legal and political constraints. Furthermore, if Germany did start reflating quickly, with wages and prices going up, significant problems could be created for the ECB and its middle of the road, one-size-fits-all monetary policy. It would find it even harder to marry its single policy for a fast growing Germany and other countries. 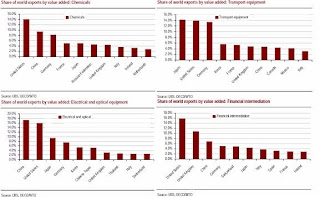 3) Even if Germany became less competitive or exported less the periphery would not necessarily pick up the slack: Again as we noted before, Germany and the periphery have very different areas of expertise and specialisation – if Germany lost competitiveness due to reflating, the periphery may not fill the gap for cheap exports, particularly in manufactured and industrial goods. Chances are that emerging markets would reap the benefits or at least a large share of them. It’s also worth noting that increasing wages may not be as simple a prospect as it sounds given that it cannot be done directly by the government and requires an agreement from both unions and businesses.

4) A less competitive eurozone: This is a point the German government has raised previously and it has some merit. Although a German reflation would aid the adjustment in other countries (as the adjustment needed to become competitive relative to Germany would be less) the competitiveness of the eurozone as a bloc would be relatively decreased since the average unit labour cost would be higher. This can be offset somewhat by a weakened currency, but given that the ECB takes no specific action to influence the euro, it is far from guaranteed.

5) Germany has had an excess of savings for a decade: While Paul Krugman is right to point out that Germany has not always run a current account surplus, it has done so for nearly the entire time the euro has existed. So why was the excessive saving in Germany not an issue previously? Obviously, global demand has fallen and domestic demand in many periphery countries has collapsed, but previously German savings were heavily invested in the southern economies (through the banking system). This no longer happens, in a large part due to concerns over the stability of the euro and these countries economies and governments. This highlights the need to address the structural flaws in the euro, improve the business climate in these economies and create a banking union.

6) You cannot have a currency with 17 Germanys: All the above said, you clearly cannot have a bloc of countries, which trades significantly with each other, all focused on creating an export model. Where would the demand come from? Clearly, Germany alone cannot provide it and being entirely reliant on external global demand is a risky strategy.

Other points to keep in mind include:

We have pointed out many time that imbalances are a big problem in the eurozone. There is no doubt some rebalancing is needed. The Economist Free Exchange blog makes a good point, that this can be done through reforms such as tax cuts and opening up markets which would not impact competitiveness directly but would boost demand. There is also no doubt that Germany’s and the eurozone’s handling of the crisis has been less than stellar, as we ourselves have noted many times.

That said, pushing much of the blame onto Germany’s current account surplus seems a bit misguided. Some correction is needed but it alone is far from enough to have a sizeable impact in reversing the crisis. That is exactly why more concrete progress on the banking union, structural reforms and reducing the democratic deficit is needed in the eurozone.