The Confederation of British Industry (CBI) has today published a report on Britain’s position in the EU, which unsurprisingly concludes that Britain should remain in the EU. It is a decent, thought-provoking read. The CBI, of course, has historically tended to back further integration (see its support for adopting the euro). However, beyond the headlines, the organisation is actually surprisingly critical of the status quo and recognises things need to change:

“The EU has moved too far from ‘adding value’ to ‘adding functions’, resulting in ‘mission creep’ in several areas. The recent Dutch declaration that ‘the time of an ‘ever closer union’ in every possible policy area is behind us’ offers a positive indication that other member states are also looking at how to refocus the EU. 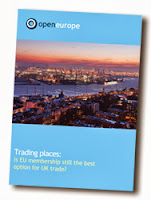 British business is convinced that, by staying in a reformed EU, the UK can get the best of both worlds – access to markets in Europe and beyond that build on our innate strengths.”

Again, this goes to show that it’s wrong to try to characterise the Europe debate – particularly as it relates to business opinion – as a polarised discussion between “pro-Europeans” and “eurosceptics” (the BBC has slipped into that again in its coverage today). What’s clear is that virtually no one wants to be seen as backing the status quo.

Within the very broad “reform camp”, there is of course a wide range of opinions. We agree that reform is possible and if attainable the UK should stay in a reformed EU rather than leave, as we set out last year in our report ‘Trading Places’ (which the CBI report draws from). The CBI report also offers some decent ideas for reform, including a sunset clause for EU laws in areas such as employment, a fresh single market drive, including in services, (which we definitely agree with), and crucially, that the “next” EU treaty includes institutionalised safeguards against the EU becoming an effective extension of the eurozone.

We have three observations, however:

First, the CBI “strongly” supports EU reform. While it plays down the risk of the “worst-case” scenarios in areas such as Eurozone caucusing, over-regulation and internal / external protectionism, it begs one question: what will the CBI’s position be in a scenario where such reforms are absent and the worst-case scenarios materialise?

Second, how confident is the CBI in its estimates of the benefits of EU membership – £3,000 per household. The study notes,

From which the CBI infers:

We’ll look at this figure in a separate blog post, as it’s important.

Finally, on the trade-offs involved in leaving, the CBI argues:

“Were the UK to leave the EU, it is not likely to adopt an off-the-peg solution; rather, it would negotiate a bespoke relationship with the EU”

We agree. There are models for ‘non-membership of the EU’: the Swiss, Norwegian and Turkish, but, as we set out last year, none of them would be suitable for the UK. The CBI also recognises that it would be an individual ‘bespoke’ UK negotiation.

We wouldn’t be nearly as pessimistic as the CBI regarding the prospects of striking a decent deal outside the EU. However, absent a damascene conversion in key parts of Europe which will have to approve a new deal (over and above basic WTO-rules), there are likely to be drawbacks. As the CBI argues:

“market access – in particular the type of access that passport regimes provide – is unlikely to come without obligations on the regulatory side, including the likely adoption of EU rules without any ability to influence these.”

So it is not that the UK could not leave the EU, and the downside can easily be overestimated, it is that a continuity deal the UK may be able to achieve is not likely to be as good as staying in a reformed EU.

So, here is the challenge we should all row behind: reform the EU as fast as possible, and in any event before the UK holds a referendum.