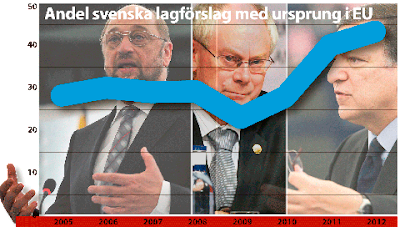 It’s up there with the origins of the universe as one of the great existential questions of our time (well…): how many national laws stem from Brussels?

European Commissioner Viviane Reding – who does what she can to turn people against the EU – recently told a “Debating Europe” event in Sweden (H/T @AllieRenison):

Did you know that 80% of Swedish laws are not Swedish laws? They are European laws that have been translated into Swedish legislation.

In addition to the comment being ridiculous (it was in reply to a question about the EU costing too much)  she seems to have plucked this number out of thin air. Incidentally, it would top Nigel Farage’s much-criticised claim that 75% of all UK laws are made in Brussels. Another example of Better Off Outers and Europhiles agreeing.

As regular readers will know, the Open Europe team has gone to hell and back trying to answer this question, and our conclusion is that it’s virtually impossible to determine with any degree of certainty what the share of EU-derived laws is. It all depends on what you count, how you define an EU-derived law and what the counter-factual is.

It most certainly is higher than 9% as some claim. Counting UK Statutory Instruments, which is what the study from which this number is drawn from did, isn’t that meaningful as there’s no 1-1 correlation between that and EU law. It also doesn’t include EU Regulations which, unlike Directives, are directly applicable, giving no rise to separate domestic legislation.

The 84% figure that is often cited originates from an answer to a German parliamentary question, comparing the number of new federal laws and new EU laws in one year. However, this is also too simplistic. For example, counting only federal laws in a federal system isn’t particularly meaningful. Germany has 16 Länder that churn out laws as well.

Now, a new Swedish study has thrown in another number to debate. The Riksdag and Departement – the Swedish Parliament’s in-house magazine – has reviewed 1,300 Swedish legislative proposals, dating back to 2005. It found that the share of legislative proposals in 2012 originating in the EU stands at 43% – a dramatic increase compared to 2010 when the share was 28%. Of the 104 laws that so far have been proposed by the Riksdag this year, about a third originate in the EU.

This is a quick and dirty study in many ways – it measures only the so-called flow of EU legislation, not its stock. And the flow clearly is subject to a lot of variation. Its proposals and not laws passed. And, as with the German study, it doesn’t look at local rules. Local government is important in the Swedish system, with Councils (or municipalities) having plenty of decision-making power. So any serious “EU law count” would have to look at this dimension as well.

But, we’re not done yet. A 2010 report by the Swedish Association of Local Authorities and Regions – who should know a thing or two about local decision-making – does address this very question. It says this:

The report shows that, on average, the EU affects 60 percent of items on municipal council agendas. The number is slightly lower for county councils and regions, where the EU influences around 50 percent of agenda items.

Given that these are local decisions, it does sound high to us, but remember the report doesn’t count laws per se, but issues considered by the local government in Sweden (public procurement considerations for example will always be influenced by EU law, despite it not necessarily giving rise to new local rules).