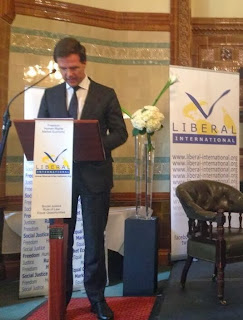 Dutch PM Mark Rutte is often seen as a key UK ally who is able to maintain warm relations with both the Liberal and Conservative sides of the coalition. In London today to deliver the Isaiah Berlin lecture he talked about the big challenges facing Europe, making the following key points:

All in all then a mixed bag for David Cameron – strong support for his vision of a leaner, business friendly, trade-orientated and more accountable EU, but scepticism towards opening up the EU Treaties which could offer possibilities for more fundamental changes.
Author : Open Europe blog team
Print