‘Handygate’: The number of EU countries involved growing by the minute 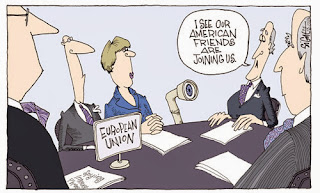 Well, this one snowballed quickly. The number of countries either implicated – or feeling the need to comment on – “Handygate” (as the Germans call it) is growing by the minute. Here’s a round-up.

Germany: The fallout over allegations that the NSA hacked Angela Merkel’s phone continues. According to Bild am Sonntag, US President Barack Obama was personally briefed about the eavesdropping by NSA Director, Keith Alexander, as far back as 2010. Several papers claim that the American embassy in Berlin was used as a hub for the alleged bugging.

However, according to US officials quoted by the WSJ and FAZ, Obama was unaware of the whole affair. The reason? The NSA has so many tapping operations going on that it wouldn’t have been practical to brief the President about all of them. The article suggests the White House did scrap some monitoring programmes upon learning about them, including the one tracking Angela Merkel.

Spain: Spanish daily El Mundo dropped a bit of a bomb today, claiming that the NSA bugged over 60 million phone calls in Spain in just one month – between 10 December 2012 and 8 January 2013. The report, also based on former NSA agent Edward Snowden’s secret documents, suggested the eavesdropping didn’t involve the actual content of the phone calls – just their duration and where they were being made from. But still.

The Spanish Foreign Ministry summoned the US Ambassador in Madrid, James Costos – who later stressed in a statement that the wire-tapping activities have played “a fundamental role” in protecting both US  interests and those of its allies. 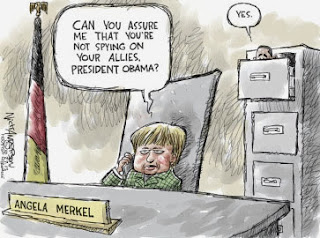 Italy: Italian magazine L’Espresso alleged last week that not only the US, but also the UK had been spying on Rome. The latest is that, according to the Cryptome website, the NSA allegedly bugged some 46 million phone calls in Italy between December 2012 and January 2013. But the Italian intelligence service has urged caution, saying there’s “no evidence” supporting the claims.

France: Though the French press has been relatively quiet about the episode today, the country has already summoned the ambassador with the accompanied public outrage from politicians. It seems to be dying down a bit in France, though.

Poland: Notoriously Atlanticist, Warsaw has also been forced to go public, with Polish Foreign Minister Radoslaw Sikorski saying over the weekend that the alleged hacking was a “scandal which undermines trust” and that he would be inquiring with Washington whether Poland was also affected by NSA surveillance. However, asked in the interview whether Poland was under surveillance, he apparently answered with a smile: “We also use surveillance”. 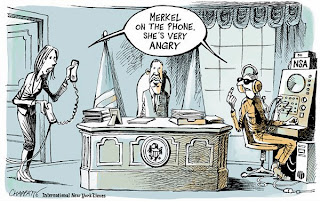 Sweden: Foreign Minister Carl Bildt has been taking a chilled approach, insisting that he knows “what kind of world we live in” and that “I never say things over the phone that could hurt Sweden if it ended up with a foreign power.”

Netherlands: Prime Minister Mark Rutte has said that “I will support [Merkel] completely in her complaint and say that this is not acceptable. I think we need all the facts on the table first.”

Belgium:  Belgian Prime Minister Elio Di Rupo commented, “The idea is to have a working method [at the EU level] by the end of the year, which should avoid that friends spy on each other.” However, asked on whether the EU should suspend free trade talks with the US, Di Rupo said, “We want to avoid blackmail.”

UK: Finally, though the worst fears over suspension of the EU-US trade deal so far have not materialised (although it’s still balanced on a knife’s edge), David Cameron remains stuck between a rock (the US) and a hard place (Germany). In the Commons today, Cameron talked up the need for a robust intelligence service, saying it has “also allowed us to warn our EU allies about terrorist plots aimed at their people.”