Another manufactured row over the EU budget? 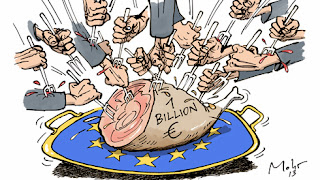 On the 30th of June 2011, the Commission unveiled its blueprint for the EU’s long term-budget (MFF) between 2020-2014. Since then, we’ve witnessed a rather drawn out and undignified scrap as member states, the Commission, MEPs and a whole assortment of lobbyists and vested interests have fought tooth and nail to ensure their own priorities secure as much funding as possible.

In the past, we compared this process to an ill-mannered round of bartering at a provincial flea market, but in retrospect this may have been an overly generous depiction. The depressing result is a budget that pointlessly recycles far too much cash around wealthier member states while not allocating enough to areas such as R&D which could enable the EU to take advantage of growth opportunities in innovate areas of the global economy.

To recap: this February, following an earlier aborted attempt, EU leaders finally struck a deal on the overall spending levels, agreeing on a historic cut in EU spending. MEPs were unhappy and demanded a whole host of concessions in exchange for their consent to the package, one of which was an additional €11.2bn to top up this year’s annual budget. In May, member states approved a first trance of €7.3bn (despite the UK’s objections), and two weeks ago provisionally approved the release of the remaining €3.9bn.

The problem was that MEPs demanded that the €3.9bn be officially signed off before they approved the MFF, and therefore postponed the vote until next month. However, this has prompted EU Commission President Barroso to warn that the EU could become “insolvent” by the middle of next month. This issue has become further complicated because the member states have apparently demanded that €400m in appropriations from the European Solidarity Fund – intended to compensate Germany, Austria, the Czech Republic for floods and drought over the Summer – be included in the €3.9bn while MEPs want the money to come from fresh national contributions.

This new argument seems particularly pointless as it affects 0.28% of EU spending this year and 0.04% of the budget for 2014-2020. It is inconceivable that the Commission could not make up this sum from existing allocations. Also, the European Solidarity Fund is primarily a symbolic instrument, especially when it comes to wealthier member states (€360m of the €400m has been allocated to Germany). Instead, this latest institutional argy-bargy has served as just another opportunity for MEPs to try to show off their importance. MEPs are also likely to publicly pick a fight over some of the cuts made by member states to next year’s annual budget as a cover to secure some minor concessions.

Surely the EU can do better than this.