Is Merkel gearing up for a scrap over EU Treaty change? 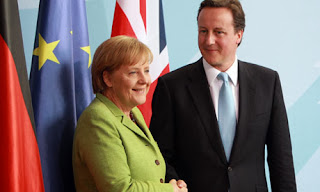 The big EU related story of the day (our bumper report on EU regulations notwithstanding) is Der Spiegel‘s splash that German Chancellor Angela Merkel set out her proposals for giving the EU greater powers over eurozone members’ national budgets to EU Council President Herman Van Rompuy last week, a move which would require EU Treaty change. Merkel will reportedly insist on legally enforceable contracts between the Commission and individual member states, setting out their obligations for maintaining budgetary discipline and improved competitiveness. In return, Germany could agree to a eurozone budget which would amount to tens of billions. Finally, the President of the Eurogroup would become a “Euro Finance Minister” of sorts.

In one form or another, these ideas have been around for a while but many politicians and commentators asserted that the German government had no interest in opening up the EU treaties. However, as we noted in our pre-election briefing:

“German politicians and the general public are both keen on stronger central eurozone control over taxation and spending as a prerequisite for any further financial aid… Such beefed-up supervision and enforcement could well require EU treaty change in some form. A Merkel-led government may well push for a formalised ‘competitiveness pact’ after the elections.”

This is only one Spiegel report, but it could well be that Merkel is looking to make a concerted push after all. She will have significant opposition to overcome in the form of the SPD, who will almost certainly be her coalition partners by December. The party remains opposed to any treaty change that could trigger referenda in individual member states (although the debt-redemption fund proposed by the German Council of Economic Experts, a policy broadly backed by the SPD, could have the same effect). Likewise other member states (chiefly France) and the EU institutions are far from keen on Treaty change. However, if Merkel has set her sights on something, we would not bet against her, not least because this move would be very popular back home.

This could be the opening that David Cameron has been looking for to force through EU reforms but at the very least will present another stage for a clearer definition on the separation between eurozone and non-euro countries and the necessary safeguards. That said, he too will have to contend with the SPD who have made it clear today that they oppose the return of powers to member states, as party of a new treaty deal specifically designed to fix the Eurozone.