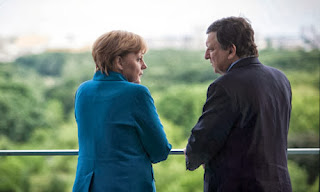 As we noted in our previous blog post – and as we predicted in our briefing trailing the German elections – Angela Merkel could now well be pushing for so-called ‘reform contracts’ or ‘competitiveness pacts’ (which is what they’re called in the CDU/CSU manifesto). The idea involves trading exceptionally strong reform commitments in the eurozone periphery in return for German cash.

We’ve managed to get our hands on an updated version of the draft European Council conclusions (which is doing the rounds in Brussels) ahead of the meeting of EU leaders later this week.

And what do you know, the following paragraphs have made it in (our emphasis):

“The Commission will provide a first overview of the implementation of country-specific recommendations that will be a basis for the monitoring of their implementation. This will also assess growth and jobs enhancing policies and measures, including the performance of labour and product markets, the efficiency of public service, as well as education and innovation in the Euro area.

On this basis, work will be carried forward to strengthen economic policy coordination, including on the main features of contractual arrangements and of associated solidarity mechanisms.”

It’s a vague formulation – and hard to know exactly what it means – but we think it’s at least fair to assume that the idea is back on the agenda (our view is it never quite went away). As we’ve argued repeatedly, the kind of beefed-up supervision and enforcement that the Germans have in mind would most likely require EU treaty change. The nature, scope and timing of such a Treaty change is anyone’s guess at the moment, however.