Like its election, Germany’s coalition talks will be dominated by domestic issues 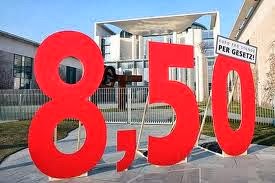 Coalition, coalition, coalition – this is all par for the course in German politics. It’s been almost a month since the BTW13, and the new government has yet to be formed. This is no cause for alarm, of course, Germans like their coalitions, and they understand that they take time to form.

With the Greens now out of talks, Angela Merkel’s CDU/CSU has to try and form a Grand Coalition with the SPD (the most popular choice for government among the public.) The parties  held third-round talks in Berlin yesterday, finally agreeing to enter formal Grand Coalition negotiations. Talks will start next week, subject to approval by an SPD party convention on Sunday.

Merkel’s priorities are clear. On Wednesday she laid out her agenda for government as she starts her third-term as Chancellor. They are: ending the eurozone crisis; cutting the costs of Germany’s energiewende (or its move from nuclear to renewable power); dealing with the problem of its ageing population and federal reform of the states.

Although the eurozone crisis is Merkel’s top priority, as we have been arguing for quite some time now, regardless of coalition outcome, the German approach to the eurozone will not change significantly: expect more of the same. The SPD influence may cause some change in style, but not substance. It is unlikely that eurozone policy will feature as the key headline during coalition negotiations.

From a domestic perspective, the focus on demographic challenges is interesting. As we have noted, this is a huge deal for Germany, with its population set to shrink significantly over the coming decades and the pension burden set to jump accordingly. How this is dealt with will play a role in determining for how long Germany retains its current status as the powerhouse of Europe. This is a question that will worry SPD and CDU alike.

Equally important, will be the cost of  Germany’s energiewende. A recent report by the FT estimates that that German consumers will have spent over €100bn on subsiding green energy by 2014. The pressure to reform Germany’s renewable energy law to lower costs will run across party lines.

Given this, the domestic issues that are bound to dominate coalition talks will be the question of introducing a minimum wage, taxation and spending. Here, the SPD will fight hard for a ‘victory’. The party knows that it lost a lot of support the last time it entered into a Grand Coalition with a significantly more powerful CDU/CSU in 2005. And this time around, Merkel’s party is even stronger (it is just a few seats shy of an absolute majority in the Bundestag). Not surprising, that reports emerging from Germany say that the SPD is fighting hard to win the Finance and Labour Ministries over the less-influential Foreign Ministry, (although, this was denied by SPD general secretary Andrea Nahles this morning.)

Although it is unlikely that the CDU/CSU will hand over the Finance Ministry, it will be willing to compromise elsewhere, giving the SPD the ‘prize’ it is looking for. This could be a compromise on mimumum wage. But it is important to distinguish here (and this is a detail that has not been grasped by some English reports on this issue), that BOTH the CDU/CSU and the SPD are in favour of a minimum wage.The question, then, is what the rate and scope of the wage should be. The SPD favour a statutory (national) minimum wage of €8.50/hr, while the CDU/CSU wants to allow trade unions and employers to negotiate the level individually in each German Bundesland, or state.

As already indicated by CDU-leader Horst Seehofer, he would be inclined to accept the SPD’s €8.50 demand under ‘certain conditions’. The caveat being that the SPD demand is OK if it doesn’t cost jobs – given that Germany is already facing some labour shortages this is plausible. Presumably, however, this means that the SPD will have make concessions on other domestic fronts – such as agreeing not to raise taxes further (one of the SPD’s key campaigning platforms) and no further creation of debt. (Like the CDU/CSU, the SPD believes in cleaning-up budgets, but it favours a less-strict austerity schedule.)

So, while the SPD is likely to win the domestic victory it is looking for – it  will not be a huge blow to Merkel’s CDU/CSU, which will be sure to win concessions elsewhere.Compromise in coalition are all part of the course in German politics.

From a wider European angle, however, the coalition talks will be broadly reminiscent of the campaign: domestic issues will supersede.