Eurostat yesterday released its latest inflation statistics and the data for the eurozone provides some food for thought.

Inflation reached its lowest levels (1.1% on an annual basis) since February 2010. This might seem surprising on the surface given all the talk of a eurozone recovery and a turn around. Why hasn’t inflation followed? Well, generally inflation is a lagging indicator and therefore any recovery will take some time to feed through to prices and wages. However, as the graph below suggests, there is more at work here. 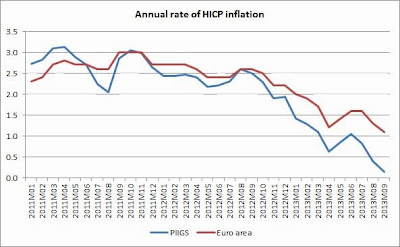 There has been significant disinflation (falling inflation but not negative inflation, which is deflation) in the eurozone and more importantly in the PIIGS. For all the talk of internal devaluation in the eurozone it has taken some time to feed through to the Consumer Price Index (CPI). Due to factors such as indirect tax increases and sticky prices and wages, it has taken some time for the impact to be fully felt – now that this is beginning to happen it is unlikely to stop immediately and could carry on for some time.

The data also shows that because of the effect described above, inflation in the PIIGS is diverging from the rest of the eurozone somewhat and particularly from the stronger countries in the north.

What does this mean for the ECB?

The FT has a couple of pieces today discussing this, calling on the ECB to do more to tackle the disinflation in the eurozone. While inflation is clearly well below the ECB’s target, the current nature of the inflation does present some issues for ECB policy.

All in all then, low inflation in the eurozone seems here to stay for some time due to the periphery pulling the average down, even if a fuller recovery eventually materialises. This will create some new issues for the ECB to deal with, however, given the divergence between countries it may well struggle to find the tools to have a big impact on this.