Row alert: Germany and the Commission clash head on over EU migration 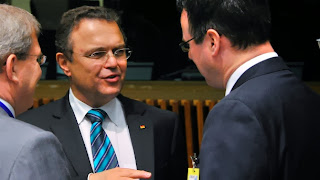 As we’ve noted previously, one now hears more rude things about the Commission in Berlin than in London. And sure enough, Germany is now heading for an almighty row with Brussels over EU migrants’ access to benefits.

EU Commissioner for Employment and Social Affairs, László Andor last week told Der Spiegel that migration to Germany from Bulgaria and Romania “only involves benefits for both sides.” The fuss over access to benefits – and potential cost to the welfare state of EU migration – is overblown, claimed Andor.

German politicians have responded with an unusual degree of fury. The CDU/CSU faction’s spokesman for interior policy, Hans-Peter Uhl, labelled the claim “an outrageous denial of reality” and a “first-class frivolity.” In case people didn’t get the message, he added that some Commissioners are as far removed from reality “as the moon from the earth” (which is about 384,000 km, so a considerable distance).

freedom of movement is not the freedom to change country because of higher benefits…The Commission needs to take this concern seriously.

Following a meeting of Interior Ministers this morning, interestingly, Friedrich has now demanded

There are similar noises coming out of the Netherlands – and of course the UK. Issues related to free movement of persons are on Interior Ministers’ agenda this afternoon. Expect this one to run and run.