The war on EU red tape: Will this time be any different? 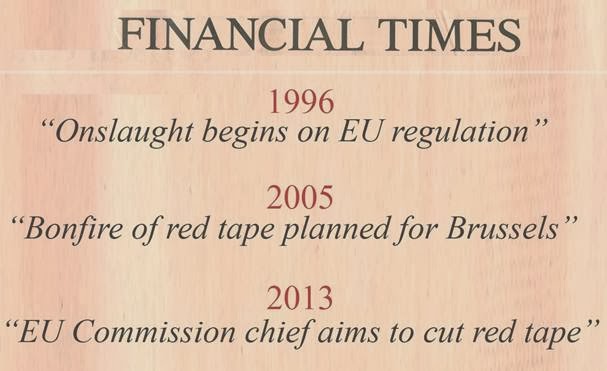 The headlines above speak for themselves. From time to time, the European Commission makes an announcement that it will make EU business rules “lighter”, “simpler” or “smarter”. But it deliberately stays away from the terms “deregulation” or “less regulation”. They are usually a mixed bag, ranging from measures with real impact to irrelevant to even involving more regulation. To date, none of these initiatives have come anywhere close to achieving less, but better EU regulation across the board, that we and many businesses are calling for.

The European Commission has now unveiled the first results of REFIT – or its Regulatory Fitness and Performance Programme. Based on a ‘screening’ of the entire stock of EU legislation, the Commission has set out what it’s planning to do (or not do) to make EU law lighter.

So will this time be different? Well, yet again, the proposal is a mixed bag.

The Commission lists a number of proposals it has already put out, and are pending approval from member states and MEPs. Some of these would have a positive impact, including:

The Commission also stresses it is already carrying out (or will do so in the near future) thorough evaluations of EU regulations in a dozen policy areas. These include:

These rules are in desperate need of revision, so well done Commission for identifying them.

Dropping proposals that are dead in the water: The Commission is offering to scrap proposals that are pending and unlikely to be adopted, which of course has no tangible impact as they haven’t been adopted yet. Some of the proposals identified (e.g. a Directive simplifying VAT obligations or a Regulation on the statute of a European private company) have been pending for ages and were unlikely to ever come to pass.

Turning several rules into one rule:  The Commission also puts forth several ideas for the ‘codification’ and the ‘consolidation’ of existing legislation, meaning turning different sets of rules into one set of rules. As we pointed out in the past, if you merge ten existing directives into one, you definitely make the acquis more user-friendly, which has value in itself. However, if the substance of the rules remain, the impact on business will also remain pretty much the same, so this is of limited value on the ground.

More EU harmonisation: Somewhat cheekily, the Commission has also snuck in a proposal for more EU integration in a contentious area by presenting a Common Consolidated Corporate Tax Base as an example of simplification. Now, there may be a business-case for a CCCTB, but this also seems like back-door ‘harmonisation’ – which is a very different thing from ‘simplification’.

In conclusion, so far there are some positive steps in here, but whether it will turn into a serious, de-regulatory exercise – with real impact on businesses – will very much depend on what comes out of the Commission’s review and level of follow through.