Handelsblatt asks, "Where is the inflation?" 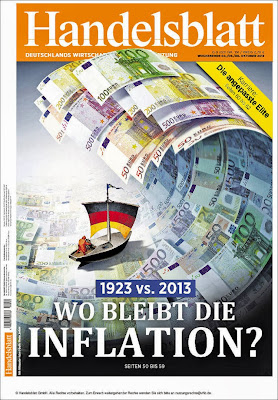 That’s today’s front page of German daily Handelsblatt, with the headline asking “Where is the inflation?”

A stark reminder of what remains a key issue in German (and therefore European) politics. We could barely ever imagine such a front page in the UK, particularly when annual inflation is running at only 1.6% (August 2013).

Inside the paper there is a ten page section discussing the issue. Essentially, Handelsblatt is questioning why, when there has been such significant money printing and low interest rates in the eurozone, is there yet to be inflation. This is put in context with a comparison to the hyperinflation of the 1920’s Weimer Republic, another reminder that this episode in the country’s history continues remains firmly embedded in the German psyche.

The discussion itself is obviously hugely technical, but the paper’s explanations for why inflation is (yet) to show up is quite telling about the debate in Germany.

Although this is clearly just the view of one paper, the tone and line of argument here is quite telling.

Clearly, there is still concern that inflation will show up and even that it may already have and be going unnoticed. This fits with recent concerns raised by the Bundesbank that low interest rates and loose monetary policy can pump up financial bubbles and set the scene for the next crisis.

This debate is here to stay in Germany and Europe. As the ECB considers further long term lending operations (LTROs), how to deal with actions of other central banks and the large divergence in growth between Germany and some struggling countries, it could come to the fore once again.