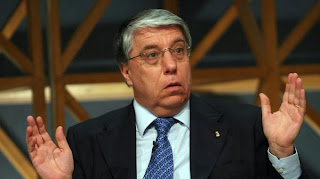 As we argued in our post yesterday, it was “not unrealistic” for Italian Prime Minister Enrico Letta to win tomorrow’s vote of confidence in the Italian Senate, even if, on paper, he didn’t have the numbers to do so.

A potentially key development now seems to confirm our first impression. Carlo Giovanardi, a centre-right Senator and a senior member of Silvio Berlusconi’s party (see picture), has just confirmed earlier rumours that a new pro-Letta group of ‘rebel’ centre-right senators is to be formed, and will support the government tomorrow.

“We do have the numbers [to form a new group], we are even more than 40, and we firmly want to maintain the balance of the government. This is why we will give [Letta] our vote of confidence.”

Clearly a game-changer. If this new group comes through with the votes, then Letta will have a much bigger chance of winning the vote of confidence and staying in power.

Equally significantly, if Berlusconi keeps pushing for a showdown but Letta ends up winning the confidence vote thanks to defectors from Il Cavaliere‘s party, this will almost inevitably have consequences for the future of the centre-right in Italy.

Keep following us on Twitter @OpenEurope and @LondonerVince for real-time updates.