Italy plunged into fresh political turmoil: End of the line for PM Letta? 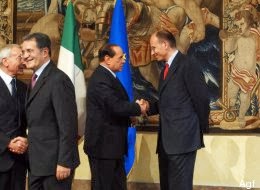 UPDATE (18:15) – Silvio Berlusconi has just come out of a meeting with MPs and Senators from his party. According to reports in the Italian media, he has outlined the following roadmap: a quick vote on the 2014 budget and a couple more economic measures (Berlusconi apparently said this can all be done in one week), followed by snap elections.

Not sure this can represent a good basis for a potential compromise with Enrico Letta’s centre-left Democratic Party – not least since Berlusconi’s strategy seems to imply a return to the polls without changing Italy’s controversial electoral law first. We explained in our original blog post from this morning why this could be a huge gamble.

UPDATE (15:45) – Italy’s Minister for Relations with Parliament, Dario Franceschini (from Enrico Letta’s party) has just confirmed that the Prime Minister will address the Italian Senate on Wednesday morning and the Chamber of Deputies on Wednesday afternoon.

However, Mr Franceschini also stressed that a confidence vote after the debate is “very likely”, but will ultimately “depend on how the debate will go”. We think there are two possible interpretations here, depending on whether one wants to see the glass half full or half empty:

1) Mr Letta is still confident Berlusconi could backtrack on his plan to bring the government down;

2) If, based on the statements made by the various political groups during the debate on Wednesday morning, Mr Letta were to deem the confidence vote in the Italian Senate absolutely impossible to win, he may decide to skip it and tender his resignation straight away.

For regular readers of this blog (see here, here and here), Silvio Berlusconi pulling the plug on Italy’s fragile coalition government was just a matter of time – especially after his conviction for tax fraud. On Saturday, Il Cavaliere ordered ministers from his party to resign and called for snap elections.

The official reason for doing so was the Italian government’s inability to scrap a VAT increase planned by the previous technocratic cabinet led by Mario Monti, due to kick in tomorrow. However, it would be naïve to see no correlation with the fact that Berlusconi is to be ousted from parliament within the next few weeks as a result of his tax fraud conviction.

So what happens next? The moment of truth will be on Wednesday, when Prime Minister Enrico Letta will seek a vote of confidence in both chambers of the Italian parliament. The key vote will be the one in the Senate, the upper chamber, where Mr Letta’s centre-left Democratic Party does not command a majority on its own.

Scenario 1 – Letta survives the confidence vote in the Senate

Tough, but definitely not unrealistic. Letta needs around 20 Senators from either Berlusconi’s party or Beppe Grillo’s Five-Star Movement to break ranks and support him. Over the past few days, politicians from both parties have hinted at possible defections. Crucially, after tendering their resignations, four of Berlusconi’s ministers have expressed reservations over their leader’s decision to open a new political crisis at this stage. All this suggests Letta does have a chance of winning the vote in the Italian Senate, and staying in power with a different, albeit thinner, parliamentary majority (and after a rather substantial cabinet reshuffle).

However, this would only be a temporary fix. With his new majority, Letta could try and address a couple of urgent issues (a reform of Italy’s tortuous electoral law and the budget for 2014 are the most obvious) – and perhaps plan for early elections at some point next year.

If Letta loses the confidence vote, he will have to resign. As we explained several times, the ball would then be in Italian President Giorgio Napolitano’s court. Napolitano would have to hold talks with all the political parties and then make a decision: task Letta himself or someone else with forming a new government, or dissolve parliament and call new elections.

New elections in Italy can take place no less than 45 days after parliament is dissolved. The risks of a quick return to the polls are obvious. Voting again with the same electoral law may well lead to another inconclusive outcome – meaning that Italy could be facing a few months of political paralysis at a time when the country can least afford it. As if things were not complicated enough, the electoral law is currently also being examined by the Italian Constitutional Court, with a ruling expected in early December – and is at risk of being declared at least in part unconstitutional.

This is where we are at. Clearly, none of the two scenarios would provide the medium-term political stability Italy needs to get its act together – which in itself is not great news for both the country and the eurozone as a whole. Everything will depend on how Wednesday’s vote of confidence goes.