The latest Cypriot deposit data is out and it shows some stabilisation in bank deposits in Cyprus. According to the data total deposits decreased by around €460m in August, although much of this was down to the conversion of 10% of unsecured Bank of Cyprus deposits into equity. 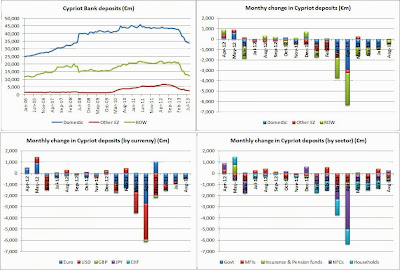 As we have always said, the real test will occur when the capital controls are finally removed, which is due to happen at the start of next year according to the Cypriot government. There is also one other concern (in terms of bank deposits, there are many concerns when it comes to Cyprus generally) – as deposits have fallen the Cypriot banks loan to deposit ratio has jumped (as the graph below from the IMF shows). 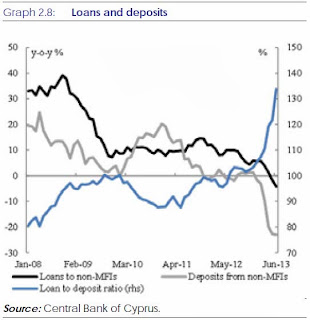 This is not unexpected, but does represent a potential risk for the banks and highlights that their reliance on ECB and ELA funding will remain for some time. That is at least until they manage to deleverage significantly and (we’d imagine) write down some of their bad loans.