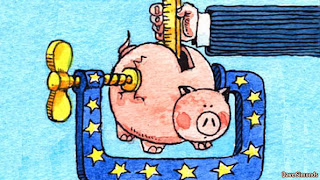 Bloomberg reports on a potential proposal by the European Commission to alter the EU’s ‘Balance of Payments’ (BoP) facility to allow it to aid banks which may need to be recapitalised in the aftermath of next year’s ECB Asset Quality Review and the EU’s bank stress tests.

As a reminder, the BoP facility was originally created to aid countries with currency crises that may impact the rest of the EU or the fundamental stability of the state. It has since been adjusted to apply to only non-euro members and seen its scope widened slightly with its budget increased to €50bn due to the financial crisis. It is guaranteed by the EU budget and therefore ultimately by the member states – with the UK underwriting around 14-15%.

What is the rationale behind this move?

Can it be done?

Could it be significant?