AfD: The party of the youth?

It’s barely been half a year since the German anti-euro party Alternative für Deutschland (AfD) emerged onto  the political scene (and we were one of the first to flag up the then-unknown party), but its ascent has been rapid.

On Sunday’s federal elections,  AfD managed to convince two million Germans to back it. With 4.7% of the final vote, the party just narrowly missed the 5% threshold to enter the Bundestag. Had AfD made it in, it would have had over 30 seats.

Age plays an interesting part in the AfD story. Had the elections been decided by younger voters, AfD would now be preparing to enter parliament. Lead by economist Bernd Lucke, the party won 6%  of  the overall share of votes from those aged between 18 to 24. It won the same amount from those aged between 25 – 44. Support for AfD drops to 5% in the 45-59 group, and to below 3% in the over-60’s category.

The 60+ voters are the clear conservative stronghold in Germany, with over 50% of them voting to conserve the status quo with Angela Merkel’s CDU/CSU. In short: the younger generations are more likely to vote for Germany’s euro-rebels than the older ones. And there is a logic to this: the older voter is more likely to feel the weight of Germany’s recent history, therefore, rejecting anything  they may perceive as ‘anti-European.’ 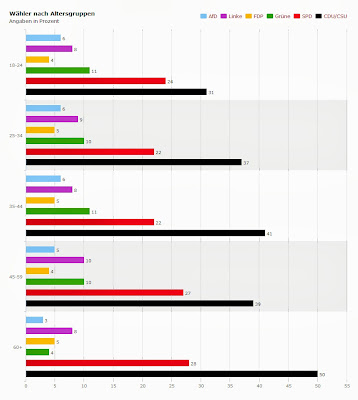 Now, the interesting dynamic in all this, is, of course, that AfD has been depicted by many commentators as the “Bourgeois protest party;” or as an old and boring “party of professors.” But obviously something about it speaks to younger voters.

“We have 20,000 members in Germany and there aren’t so many professors in Germany. Our membership is coming from all stratas of the population.” 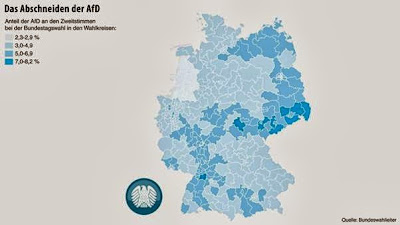 Another interesting element to highlight is that AfD won enough votes to take it over the 5% barrier, in all but one of the eastern German states.

The AfD’s candidate in Brandenburg, Alexander Gauland, thinks that this is because “people are not so strongly bound to parties in the east”, while another prominent AfD candidate, Konrad Adam, adds: “eastern Germans haven’t got bad experiences with experiments.” And indeed, if a new currency were introduced in Germany (the AfD argues against the euro), it could be easier for east Germans to stomach: it would be their fourth currency in 25 years.

So what side of the political spectrum does AfD gets its votes from?

Richard Hilmer from leading German pollser Infratest Dimap, explains that “AfD voters come from all political directions,” stressing that the “party of professors” actually received most support from workers. The graph below shows that AfD got its largest share of votes from the FDP and Die Linke, but also a sizeable part from the CDU/CSU and the SPD: 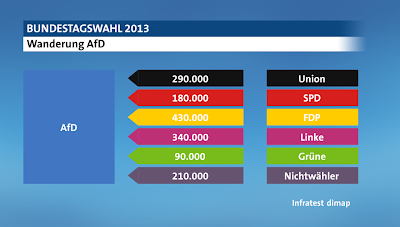 Commenting on his party’s future on Phoenix TV, Lucke said: “We need to become more professional for the elections in 2014,  [during] this campaign we had to improvise a lot.”

But it looks like Lucke, (who is yet to decide whether or not he will run in the European elections in May 2014) may enjoy further success. Bear in mind that the threshold to enter the European Parliament is only 3%. In the last European elections in 2009, the CSU and Die Linke got about 2 million votes, resulting in 8 MEP seats. AfD has already shown that it can mobilise such numbers.

Moreover, EU-protest parties (such as UKIP, for example) tend to perform their strongest in European elections. And while this is not to gloss over the considerable differences between UKIP and AfD as parties, this should raise expectations for AfD’s showing next year.

It may not have made it into the Bundestag, but we still may have a lot more to hear from AfD.