Our Director Mats Persson has an op-ed in today’s Telegraph. See below for the full text. 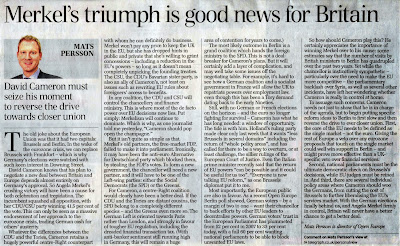 The old joke about the European Union was that it had two capitals: Brussels and Berlin. In the wake of the eurozone crisis, we can replace Brussels with Frankfurt – which is why Germany’s elections were watched with such keen interest in Downing Street.

David Cameron knows that his plan to negotiate a new deal between Britain and Europe depends almost entirely on Germany’s approval. So Angela Merkel’s crushing victory will have been a cause for both celebration and trepidation. The incumbent squashed all opposition, with her CDU/CSU party winning 41.5 per cent of the vote. This can only be seen as a massive endorsement of her approach to the eurozone crisis, trading German cash for others’ austerity.

Whatever the differences between the CDU and the Tories, Cameron retains a hugely powerful centre-Right counterpart with whom he can definitely do business. Merkel won’t pay any price to keep the UK in the EU, but she has dropped hints in public and private that she’s willing to grant concessions – including a reduction in the EU’s powers – so long as it doesn’t mean completely unpicking the founding treaties. The CSU, the CDU’s Bavarian sister party, is also an ally of Cameron’s, not least on issues such as rewriting EU rules about foreigners’ access to benefits.

In any coalition, the CDU and CSU will control the chancellery and finance ministry. This is where most of the de facto power over EU decisions now lies. Put simply: Merkelism will continue to dominate. Which is why, as one journalist told me yesterday, “Cameron should pop open the champagne.”

But it isn’t quite as simple as that. Merkel’s old partners, the free-market FDP, failed to make it into parliament. Ironically, it may have been the anti-euro Alternative fur Deutschland party which blocked them, by stealing the FDP’s votes. To form a new government, the chancellor will need a new partner, and it will have to be one of the Left-wing parties: either the Social Democrats (the SPD) or the Greens.

For Cameron, a centre-Right coalition would clearly have been a better deal. If the CDU and the Tories are distant cousins, the SPD belong to a completely different species – and the Greens even more so. The German Left is oriented towards Paris rather than London, and strongly in favour of tougher EU regulation, including the dreaded financial transaction tax. (With anti-banker sentiment still running high in Germany, this will remain a huge area of contention for years to come.)

The most likely outcome in Berlin is a grand coalition which hands the foreign ministry to the SPD. This is not a deal-breaker for Cameron’s plans. But it will certainly add a layer of complication, and may well take some issues off the negotiating table. For example, it’s hard to see how a German coalition and a socialist government in France will allow the UK to repatriate powers over employment law, even though this has been a Tory demand dating back to the early Nineties.

Still, with no German or French elections on the horizon – and the euro no longer fighting for survival – Cameron has what he has long needed: a window of opportunity. The tide is with him. Holland’s ruling party made clear only last week that it wants “less Brussels in several domains” including the return of “whole policy areas”, and has called for there to be a way to overturn, or at least challenge, the sillier rulings of the European Court of Justice. Even the Italian prime minister recently said that the return of EU powers “can be possible and it could be useful for us too”. “Everyone is now talking EU reform,” as one Brussels diplomat put it to me.

Most importantly, the European public are also in favour. As a recent Open Europe Berlin poll showed, German voters – by a margin of two to one – want their chancellor to back efforts by other EU leaders to decentralise powers. German voters’ trust in the European Parliament has plummeted from 52 per cent in 2007 to 33 per cent today, with a full 60 per cent wanting national parliaments to be able to block unwanted EU laws.

So how should Cameron play this? He certainly appreciates the importance of winning Merkel over to his cause: some estimates say that the number of visits by British ministers to Berlin has quadrupled over the past two years. Yet while the chancellor is instinctively sympathetic – particularly over the need to make the EU more competitive – the parliamentary backlash over Syria, as well as several other incidents, have left her wondering whether Cameron is really in control at home.

To assuage such concerns, Cameron needs not just to show that he is in charge of the agenda, but to begin putting specific reform ideas to Berlin to first slow and then reverse the drive to ever closer union. First, the core of the EU needs to be defined as the single market – not the euro. Giving the rest of Europe a veto over any eurozone proposals that touch on the single market could well win support in Berlin – and might prove more effective than a UK-specific veto over financial services.

Second, national parliaments must be the ultimate democratic check on Brussels’s decisions, while EU judges must be reined in. And third, there are several individual policy areas where Cameron should woo the Germans, from cutting the cost of Brussels to further liberalising the EU’s services market. With the German elections finally behind us, and Angela Merkel firmly in control, Britain will never have a better chance to get a better deal.