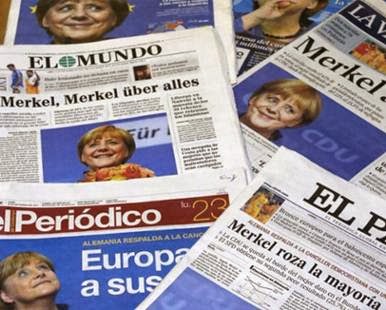 Mixed Reaction in the Med

Spanish daily El Mundo runs with the headline “Merkel, Merkel über alles”, while an article in the paper argues that a Grand Coalition (composed of Merkel’s CDU/CSU and the centre-left SPD) “would lead, to a certain extent, to a relaxation of the austerity Merkel imposes on Europe.”

Meanwhile, Spanish Foreign Minister José-Manuel García Margallo went even further with his hopes that new German government would relax the pace of austerity in the eurozone’s Southern periphery, telling Cinco Dias that “Eurobonds will come.”  (We disagree with this assessment, read our German election briefing to find out why.)

An editorial in El Pais suggests that the result “validates [Merkel’s] European theses”. Les Echos agrees, arguing that it is “illusory” to expect a Grand Coalition to “fundamentally” shift Berlin’s approach to the eurozone.

In France Les Dernieres Nouvelles D’Alsace argues that the election outcome is “unlucky for France, whose voice does not count anymore, and will only be heard again when the French economy improves”. Meanwhile, Le Figaro splashes a beaming Merkel on its front page with the headline, “The Triumph of Merkel,” pointing out that a victory like this has not been seen in over half a century.

From Greece – less congratulatory tones. An article in Greek daily Ta Nea carries the headline, “Europe becomes Merkeland after the triumph of the Queen of austerity.”

Northern Europe congratulates victorious Merkel – but warns of the challenges ahead

A leader in Dutch daily Trouw argues that Merkel was re-elected because of the German public’s “reluctance to engage in big adventures.” However, it adds that “for Europe, Merkel’s victory is good news…Merkel believes in political and monetary entrenchment of her country in Europe – and without Germany the euro is a lost project.”

Meanwhile, De Volkskrant quotes an unnamed EU ambassador of a eurozone country saying that the member states are “27 poodles on the leash of Angela Merkel”. The newspaper adds: “the Empress herself stresses that she is in favour of a European Germany, and that is undoubtedly true”. The paper goes on to criticise Dutch PM Mark Rutte, saying, “Mark wants what empress Angela wants. The German voter has on Sunday decided the European agenda of Mark Rutte”.

Belgian centre-left daily Le Soir  takes a consiliatory tone, arguing: “Certainly the Greeks don’t like [Merkel]. But what would Greece and the euro today be if she hadn’t insisted that the Greeks must tighten the belt before receiving European funds? Who else in the European Council would have managed to keep heads cool when having to listen to the cries on the streets of “Merkel, Hitler”?”

Meanwhile, Politiken from Copenhagen congratulates Merkel, while urging her to take action, saying,“The key is that the German government creates stability and firmly stands behind its support of EU and the euro… It is necessary that the new German government puts itself at the forefront of a European recovery”

Austria’s Der Standard reports on Merkel’s “middle-direction, mediocrity, ” which “gives the Germans soundness and stability.” Separately, a piece in the Telegraph argues Merkel’s re-election should not lull the Germans into complacency, which could prevent it from making the necessary reforms to fix the underlying structural weaknesses in its economy. 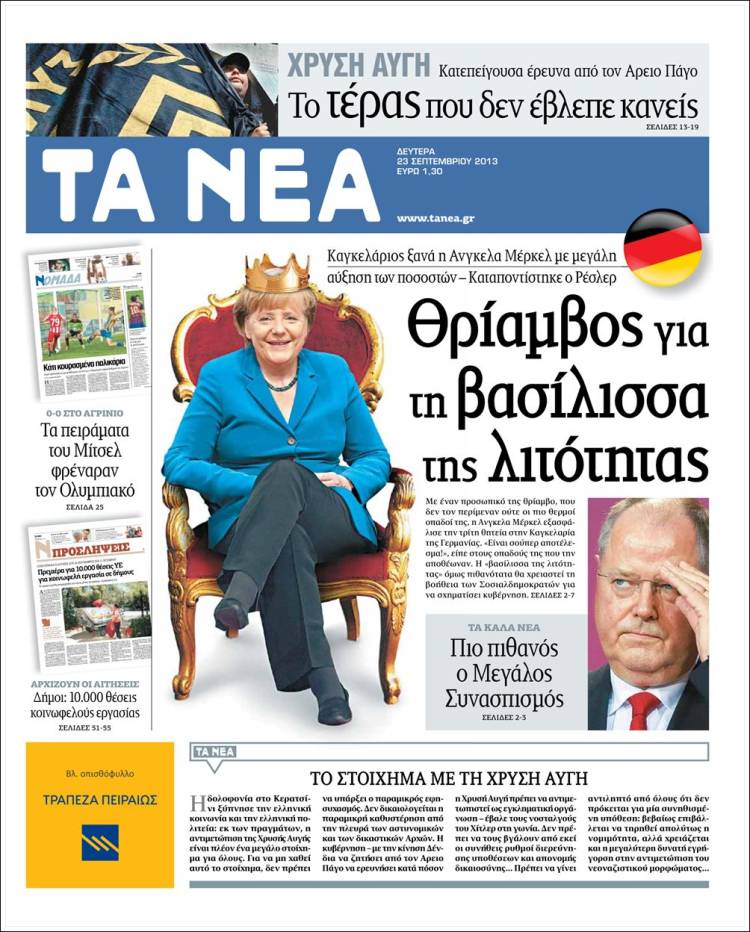 Lidové Noviny from Prague takes a more critical view of Merkel’s re-election, saying that she has “brought no solutions, and the eurozone remains a risk for the lasting prosperity of Europe.” The paper writes that, “It is indeed sad that the euro-sceptic party Alternative für Deutschland has narrowly failed to reach the Bundestag. This would have opened the political debate in Germany. But next year will see elections for the European Parliament and then the AfD could get a breakthrough.”

Polish daily Rzeczpospolita says that “a miracle is expected from Merkel: reform the EU to make it attractive for future generations. The new government has to show that it is possible in crisis-torn Europe to combine sound economic policies with growth incentives. The young generation needs a signal that it is not eternally damned to live worse than their fathers and grandfathers.”

Varied reactions then as expected. However, there does seem to be a consensus that, for better or worse, Merkel will continue to set the tone and agenda for Europe for some time to come.