As focus shifts to German coalition negotiations, who are the key players to watch? 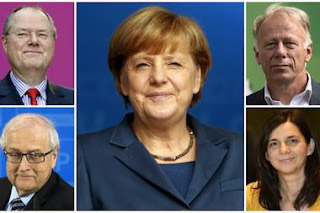 After a surprisingly manic election night the focus in Germany now shifts to the tricky task of forming a government. As we noted yesterday, many options remain possible. Merkel looks unlikely to gain a majority on her own while the FDP and AfD are certainly out of the Bundestag.

This leaves a Grand Coalition, a CDU/CSU and Greens coalition or (as a very, very longshot) some form of SPD-Greens-Die Linke (Red-Red-Green) coalition or alliance which could still mathematically have a majority.

Little progress is expected before the end of the week, with the SPD holding a small party conference on Friday where it will determine its strategy for the negotiations. SPD Chancellor Candidate Peer Steinbrück has already said that the “ball is now in Merkel’s court”, suggesting he expects her to propose the terms of any Grand Coalition. Meanwhile, Greens leader Jürgen Trittin has said that, while open to negotiations over a coalition with Merkel, the chances of finding an agreement are “extremely limited”.

Who are the key players in the formation of the new government?

Angela Merkel (Chancellor – CDU/CSU): As Chancellor in her third term, Merkel will remain the key power player. Her slow and incremental approach will continue and set the tone for the whole government. Her term will be dominated by questions over her successor – for which there are few candidates. Rumours already abound that she may leave before the end of her term. She will need to identify and groom a successor, however, whether this will erode her own power base remains to be seen. Remains a key ally for Cameron and the key person he needs to convince for his reform agenda.

Peer Steinbrück (SPD Chancellor Candidate): Likely to lead the coalition negotiations for the SPD (although this could still change), but won’t take up any ministerial post in a grand coalition. Could well pay the price for the party’s poor electoral showing.

Sigmar Gabriel (SPD Chairman): Likely to be Vice-Chancellor and take up ministerial post (either labour or defence) under a grand coalition. However, given the bad overall score for the SPD, the existing internal pressure on Gabriel might reach a tipping-point and leave him empty-handed.

Frank-Walter Steinmeier (Leader of the Opposition in the Bundestag – SPD): Likely to become Foreign Minister under a grand coalition as in he was in 2005 – 2009. Had a reputation for undermining some of Merkel’s foreign policy goals in the previous coalition. Often seen as a Francophile and has previously suggested he believes the UK will leave the EU. Could hamper UK reform effort, although that said, much of the power on European decisions now lies in the Kanzleramt and Finance Ministry. Furthermore, the shift from current incumbent, Guido Westerwelle, may not be huge.

Thomas Oppermann (SPD): Likely to become Interior Minister given his expertise in this field.

Greens leadership: After the Greens slipped to 8.4% (compared to 10.7% in previous elections), a lot of internal movement is going on. The party’s Chief Whip, Volcker Beck, has already announced his resignation while the double party chairmanship, Claudia Roth and Cem Özdemir, offered their resignation this morning.

Both lead candidates, Katrin Göring-Eckar and Jürgen Trittin, seem to be dedicated to stay even though internal party pressure is increasing on the latter. Finally, the leader of the Green parliamentary group, Renate Künast, would need to be considered among the key players in a potential coalition with the CDU/CSU. What ministerial posts they could or would push for is unclear, but one would assume environmental and energy related posts would be top of the list