The top 10 ‘spiciest’ moments of the German elections

How do we put this delicately…the Germans aren’t exactly known for their sense of humour. Equally neither are politicians, other than attracting derisory chuckles at their attempts to seem cool or in touch with the common man. Combine the two and result is often enough to drive large swathes of people to watch the handwork of their decorator dry slowly.

This round of German elections has been little different, not least because Angela Merkel has actively employed the tactic of trying to bore people into voting for her (see cartoon below). We haven’t seen so many references to ‘Safe Hands’ since David Seaman’s auto biography.

Fortunately, there have been a some spicier moments (though we refrain from call them “highlights”), here are the top 10: 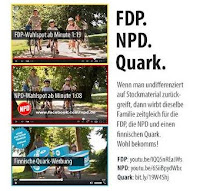 The FDP, neo-nazis and a cream cheese discover they have something in common

An awkward moment for the FDP when someone spotted that a stock image of an all-German family used in one of their televised ads also featured in a campaign video for the far-right/neo-Nazi NPD party. Bizarrely, the same family also featured in an advert for a Finnish cream cheese. Unfortunately for the FDP, the moment has not proved as embarassing as being seen as a photocopy of the CDU. 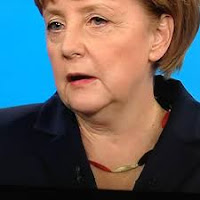 The necklace that won the #tvduel

We all know Germans love gold but this takes the nugget. The only TV debate between Angela Merkel and Peer Steinbrück was considered so dull that it prompted many to proclaim Merkel’s fetching patriotic necklace the real winner of the debate, and it quickly gained its own Twitter account with over 8,700 followers to date. 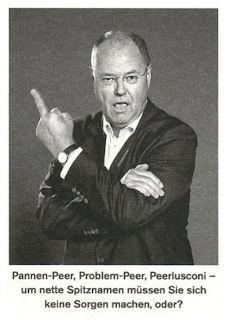 After losing his only televised debate to a necklace, Peer felt the need to take drastic action. But what to do? Well, apparently, if your words aren’t working, go ‘wordless’. Peer Steinbrück signed up for a ‘wordless interview’ with Süddeutsche Magazin which ended up receiving widespread coverage in Germany and abroad after he responded to a question by unapologetically flipping the bird. Unfortunately, rather than inspiring the electorate they simply replied in kind… 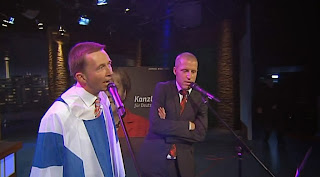 If you thought Peer’s wordless interview was bizarre, wait until you see this. AfD leader (and serious German professor) Bernd Lucke held an interview with German channel Tele 5 on why Greece should leave the euro, during most of which he wore a Greek flag as a toga. He then proceeded to sing a duet with the host, of the AfD’s official song to the backing music of Take That’s ‘Back for good’ (a song which Lucke had apparently never heard before). On top of all of this, as some of the papers noted, one of the producers of the show is Greek and proceeded to periodically alter Lucke’s voice so that he sounded like Mickey Mouse. A truly bizarre election interview, which is well worth watching even if you don’t speak German.

Don’t mess with the Currywurst 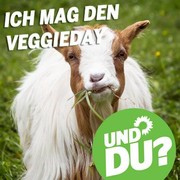 While pushing for the humane treatment of animals, the Green party ironically managed to shoot themselves in the foot. In an almost inexplicable move, they proposed forcing all public canteens to make one day a week vegetarian day. Unsurprisingly, the suggestion did not go down well in a country famous for loving its meat. “How dare the Greens tell us what to eat!” thundered Germany’s mass circulation Bild newspaper, the day after the proposal was floated. What next? Banning nudism, autobahns or the Hoff…? You simply don’t mess with the Currywurst or the Schweinshaxe. The Greens have recently slipped a couple of points in the polls – clearly no coincidence…

Beating the kids at their own game 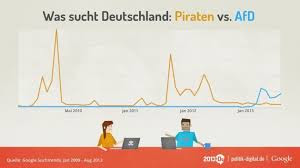 The new anti-euro party Alternative für Deutschland was widely derided as a party for old, white and grumpy men or alternatively as the ‘Professor party’ (if only it was true some would say). The contrast with the young, swinging and tech savvy Pirate party could hardly be greater. However, the AfD has proved it is no slouch when it comes to online campaigning with one of its election campaign videos getting over a million hits, while a Pirate video has received only just over 10,000 views. 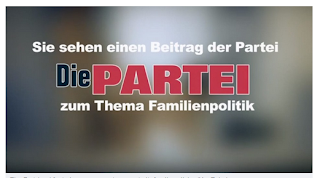 The brilliantly named Partei für Arbeit, Rechtsstaat, Tierschutz, Elitenförderung und basisdemokratische Initiative (Party for Work, Rule-of-Law, Protection of Animals, Advancement of Elites, and Grassroots-Democratic Initiative) – shortened to Die Partei – is a German satirical party akin to the UK’s Monster Raving Loony Party, but much funnier. Set up by Martin Sonneborn, editor of the satirical Titanic magazine, its campaign pledges include razing the City of London to the ground and putting Angela Merkel on trial in a cage. Die Partei also released an election video on ‘family policy’ featuring (pixelated) scenes from an adult film with a soundtrack of “moaning and groaning, accompanied by light-hearted background music”.

We’re not sure if it is her or her necklace, but Merkel has certainly lulled the electorate into a state of tepid contentedness. This cartoon perfectly captures the excitement of the CDU’s election campaign. Merkel: “You are going to sleep. Everything is good. You are going out to vote…”

A rough ride for AfD 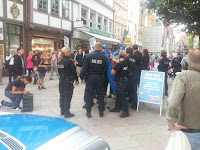 In their misguided attempts to stop the AfD expressing its alleged intolerant views the members of the Green youth decided to physically halt AfD activists from their right to freedom of speech and expression, with no sense of irony. Green with envy of the AfD’s media coverage perhaps? In any case, as reported by Spiegel, this is likely to help the anti-euro party’s chances, rather then hurt them. 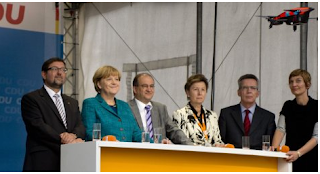 Just when the scandal surrounding the government’s bungled purchase of the multi-million euro ‘Euro Hawk’ surveillance drone was beginning to fade, a CDU event with Angela Merkel and Defence Minister de Maizière in Dresden was interrupted by a miniature drone operated by remote control. The Pirate party claimed responsibility, saying that “The goal was to make Chancellor Merkel and Defence Minister de Maizière realise what it’s like to be subjected to drone observation”. Judging by the results above maybe they should just make her watch their election video…

Oh, sorry, that was in 1989…maybe it just seems like yesterday since we watch it on a daily basis…