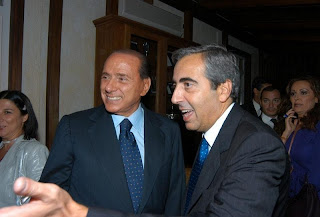 Maurizio Gasparri, a senior member of Silvio Berlusconi’s PdL party and a Vice-President of the Italian Senate, yesterday launched one of the toughest verbal attacks on a member of the European Commission we can think of over the past months, if not years. His target was EU Economic and Monetary Affairs Commissioner Olli Rehn, and here’s what Mr Gasparri said,

It’s time to stop it with the ‘corporals of the day’ such as this Olli Rehn, a Mr Nobody who comes to Italy acting as a supervisor. He should rather meditate on the disasters that people like him have caused by destroying Europe. Thick bureaucrats who kill the peoples [of Europe] and make the continent die because of China’s unfair competition and [their] ruinous economic policies. This Rehn is persona non grata. He should take a plane, go back home and pay as many taxes he likes.

But what prompted this rant? Very simple. During a hearing in the Italian parliament earlier in the day, Rehn had noted that the abolition of a controversial property tax on first homes – one of Berlusconi’s flagship electoral pledges – was not in line with the European Commission’s economic policy recommendations to Italy, and cast doubts over the country’s ability to meet the deficit targets agreed with Brussels.

Interestingly, Mr Gasparri’s critical reaction to Rehn’s remarks was not the only one of the day either, though arguably the most colourful. Stefano Fassina, Italy’s centre-left Deputy Economy Minister, also invited Rehn to “think about the mistakes the European Commission has made in all these years instead of continuing to give us lessons.” Another sign that ‘austerity fatigue’ in Italy is also mounting among a number of top politicians, not just the citizens.