Ten years on, what Britain can learn from the Swedish euro referendum 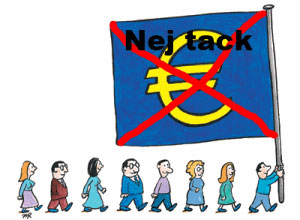 Last Saturday was the tenth anniversary of the Swedish referendum on the euro, and our Director, Mats Persson, wrote this piece for the Guardian‘s Comment is Free:

I used to be sceptical of referendums. They are populist instruments, I thought. Voters never vote on the actual issue. And what do voters know anyway? Then the euro happened.

Saturday is the 10-year anniversary of the Swedish public voting no to joining the euro in a high-profile referendum, 56% to 42%. The Swedish elite was in shock. All the major parties, the national newspapers, the business organisations, including the Swedish CBI, and most of Stockholm’s chattering classes favoured ditching the krona. According to some estimates, the yes campaign outspent the no campaign 10 to one. There were a lot of clever and genuine people on the yes side, making valid arguments such as eliminating exchange risk for business and replacing the flaky devaluation policies of the past.

However, it was obvious that something wasn’t quite right. Yes, perhaps Sweden could benefit from sharing a currency with Germany, the destination of many of its exports. But the euro wasn’t about liberal economics: stretching from the Arctic circle to Sicily, it locked vastly different countries, cultures and economic structures, into one monetary system, under a single interest rate – forever binding together the problems of all its members, large or small. It was a system based on the hopelessly flawed assumption that politicians and central bankers would make the right decisions all the time.

As with all referendums, there were various reasons why the Swedish public voted no, including an inherent bias in favour of the status quo. Fundamentally, though, most Swedes’ gut instinct – bondförnuft as the Swedes say (literally “farmer’s common sense”) – told them that a serial defaulter with dubious finances, Greece, and a heavily industrialised exporter with an obsession with sound money, Germany, simply couldn’t share the same currency. Swedes treated the exam question with the same kind of book-keepers’ approach by which many of them run their own household economies. Whatever the experts told them, the arguments – and the numbers – simply didn’t add up.

Ten years on, Europe is shrouded in uncertainty, but one thing is clear: the Swedish public got it right, the elite got it wrong. Though there may have been some politicians in Sweden and elsewhere who saw the single currency as the ultimate way to set the snowball rolling towards an EU superstate, the euro was far more a case of cock-up than conspiracy. Today, 80-90% of Swedes oppose the euro, and the political and business elites are wary too – save the odd isolated politician doing an impression of the Japanese soldiers found in the 1960s refusing to believe the second world war had ended.

However, referendums are by no means a magical potion. It’s clear that there are cases where they’re hijacked or misused – and where they lead to outcomes that no one intended or that settle nothing. Sweden itself has some less successful experiences with public votes. In 1980, a three-way referendum on whether to ditch nuclear power – arguably a populist kneejerk response to the Harrisburg disaster – generated a vote in favour of a vague plan to incrementally dismantle all nuclear plants. The result was totally inconclusive, leaving half the country embittered on the issue (Sweden still has nuclear power today).

Incidentally, there’s a lesson for David Cameron here. He has promised to negotiate a new settlement in the EU and put that to an in/out referendum by 2017. If that indeed happens, the worst possible outcome is a 49-51% type result, too close to call in either direction. As in Sweden in 1980, much of the population would feel disenfranchised and the EU debate will continue just as before. This isn’t in either the UK’s or Europe’s interest.

To avoid this scenario, there needs to be substantial and systemic changes, ideally rooted in EU-wide solutions so that they last (unilateral opt-outs tend to be eroded). That would allow a decisive vote in favour of the UK staying in a heavily reformed, slimmed-down EU.

One can have different views on Cameron’s strategy, but given public and political discontent about the EU status quo, sooner or later there will probably have to be a referendum to settle the Europe question in this country. And as the Swedish euro vote shows – warts and all, the public can opt for perfectly rational and responsible outcomes that would not occur if politicians were left to their own devices.