According to prominent pollster Dutch Maurice de Hond, just one year on from last year’s elections, the Dutch government coalition of the centre-right VVD and centre-left PvdA would lose more than half of its parliamentary seats if elections were held now. They would only retain 30 of their 79 seats, representing 12% (in the case of the VVD) and 7% (in the case of the PvdA) of Dutch voters.

Geert Wilders’ right-wing populist PVV remains the most popular party, which it has been since late last year, and would double its number of seats from 15 to 32, representing one in five Dutch voters. We commented after the elections last year that the relatively bad results for Wilders and the eurosceptic Socialist Party – which would also see an increase in its seats from 15 to 24 according to the latest poll – was hardly the victory for the centre that some had suggested. 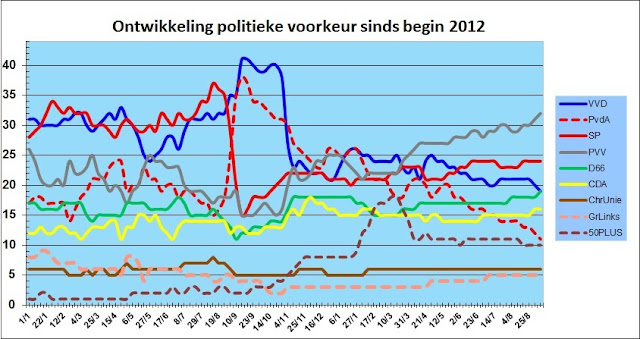 The opinion poll also reveals that 48% of respondents do not believe that the coalition will still be in power in 6 months time, while 37% believe it will.

While there is a majority in the Lower House, the coalition doesn’t have one in the Dutch Senate. The Dutch government has already announced that there is an agreement within the coalition on €6 billion in extra austerity measures and that the details will be unveiled by Finance Minister Jeroen Dijsselbloem on “Prince’s Day” on 17 September. The plans would see the Netherlands closer towards the EU budget deficit target.

Although the Senate does not traditionally reject the government budget – the last time this happened was in 1907 – the VVD-PvdA coalition has reportedly approached two opposition parties, the D66 and CDA, to see whether they’d like to join the coalition in order to obtain a majority in the Senate. The D66 have refused.

The Dutch economy faces huge challenges, with a housing bust which saw house prices falling 20% below their 2008 peak, while no less than one million Dutch households find themselves in negative equity. That’s one in four households with a mortgage. The ECB has expressed concern that mortgages are putting enormous pressure on the financial positions of Dutch banks, while the world’s largest bond investor, PIMCO, has noted the Dutch economic crisis may spill over to government bonds, suggesting it will no longer buy Dutch government paper and that the triple A country may face French borrowing levels in future.

The Dutch economic advisory council of the Dutch government has a stark warning:

“Dutch households now have the highest level of long-term debt in the euro zone. In 1995, the debt ratio in Germany was at the same level as in the Netherlands (about 56%); for Dutch households, it is now twice as high as in Germany”

At the same time, the newspapers continue to run stories about the ongoing eurocrisis, with extra assistance to Greece on the horizon. This is something Prime Minister Mark Rutte said would not happen. In addition, as we report in today’s press summary, immigration has become a heated topic; according to a recent poll, 81% of the Dutch population are opposed to the lifting of labour market restrictions for Bulgarians and Romanians in January 2014.

In an attempt to address the public’s sense that things are out of control, the Dutch government has published its EU “subsidiarity review”, an assessment of what the EU should and shouldn’t be doing, which it will present to other EU governments in the coming months.

However, the above would suggest that the Dutch electorate will need a lot of convincing if it is to put its faith in the mainstream parties again at the next election.