This is how Merkel could flunk the elections: enter the Far Left

Coalition politics combined with proportional representation and a fundamentally regionalised system can create the most fascinating potential outcomes – and do your head in. Like this: Merkel could still lose the German elections. Die Linke – the far-left party with a touch of DDR-nostalgia – could become the Kingmaker, paving way for a Social Democrat (SPD)-Green coalition. 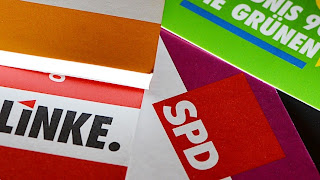 This is how it could work:

The latest polls put the CDU/CSU at 41% and the SPD on 26% – with 59% of voters supporting Merkel as Chancellor compared to 30% who support the SPD’s Steinbrück. With the SPD and Greens still far off an absolute majority as a block, and with the FDP – Merkel’s current junior coalition partner polling at 5-6% ( the Bundestag threshold is 5%), it may seem as if Merkel has bagged it, either as part of a CDU/CSU-FDP coalition, or a CDU/CSU-SPD grand coalition.

However, this race isn’t over yet. If the FDP fails to make the 5% threshold, a lot can happen. The FDP could fail for two reasons: AfD could be nicking more votes from the FDP than expected, and ironically, the FDP scoring well in the Bavarian State elections on 15 September, could divert strategic CDU votes away from the FDP (voters who might vote strategically may have a false sense of confidence in FDP’s chances).

With the FDP out, the CDU/CSU is unlikely to get an absolute majority of Bundestag seats of its own, so it all becomes a matter of which constellation can reach a relative majority.

Enter Die Linke. The political divide between SPD-Greens and Die Linke is far too wide for them to actual joining forces in a coalition – in some SPD circles, Die Linke is, frankly, considered to be full of nutters. However, these parties do have one common interest: get rid of Merkel. So instead of SPD or Greens entering a very messy coalition arrangement with CDU/CSU (which no one wants, except the voters), they can strike a dirty deal with Die Linke whereby the former offer its passive support in the Bundestag on a policy-by-policy basis. A minority government with Die Linke’s blessing.

SPD/Greens would have to offer Die Linke something in return, of course, and the question if there’s any policy area where there’s sufficient overlap – or at least not outright conflict – between the parties manifestos for a deal to be struck. A new wealth tax perhaps? What’s clear is that Germany would take a quantum leap to the left.

What’s interesting is that though Die Linke leadership has previously hinted at this option being ruled out, the party never moved to rule it out completely. Die Linke head Bernd Riexinger said recently “If there is a majority against Merkel [after the elections], I will not exclude any option…only content will decide.” This is a clear invitation. However, we still hold this is as unlikely.

It would be interesting though to observe how Germany, governed by an SPD-Green coalition with Die Linke’s blessing, would continue its leadership role in the eurozone.

Speaking on the campaign trail yesterday, the SPD’s Chancellor Candidate, Peer Steinbrück reiterated that “The SPD does not consider Die Linke appropriate as a coalition partner.” It remains unclear, however, if  Steinbrück is rejecting cooperation with Die Linke until election night, or for the entire duration of the new government term.