ECB preview – is the ECB already seeing the limits of its new communication policy?

The ECB holds its monthly meeting today in what may be seen as the most positive eurozone economic environment for some time.

Having previously been earmarked as a meeting which could see a further rate cut (a prediction which has evaporated due to more positive economic data) this meeting is now likely to be dominated by ECB President Mario Draghi’s attempts to restate his new communication policy.

July saw the launch of this policy, focused on ‘forward guidance’ (forecasting future interest rates) and the potential publishing of minutes of ECB meetings, in an attempt to add a new tool to the ECB’s monetary policy arsenal. However, in recent weeks there have been indications that the ECB may already be seeing the limits of such an approach. 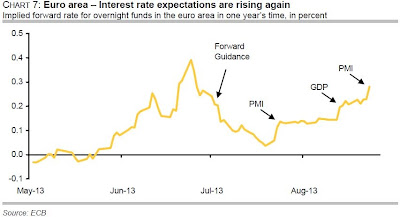 Backing away from minutes

The other part of this new communication strategy was a move towards publishing minutes of ECB Governing Council meetings, with many ECB members issuing support. However, there are indications that this may also come up against problems (as might have been expected).

The concern has always been that divergent views within the ECB (read, from the Bundesbank) would make ECB minutes more trouble than they’re worth. Over the past few weeks we have seen the Bundesbank use its monthly bulletin to warn that rates could still increase and attempt temper the commitment under ‘forward guidance’, while its President, Jens Weidmann, has also warned of the potential “pressure” on decision makers if minutes were published. Additionally, comments from Austrian Central Bank Governor Ewald Nowotny suggested that the ECB might be backing away from the plans (such interventions are rarely made without some approval from the ECB hierarchy as we saw when minutes were proposed):

“My personal view is that of the founding fathers of the ECB…They were very cautious to secure the independence of the ECB by not giving minutes on the individual votes of the members of the Governing Council.”

All these factors then, have worked to expose some of the frailties of the ECB’s guidance policy, not least that it remains much more vague and unfocused than those employed at the US Fed and the BoE. The ECB (with some good reason) is hesitant to get into specifics over the timeline and conditions for keeping rates low – this will clearly hamper the usefulness of this policy tool (and brings us back to questions about how many tools the ECB really has at its disposal).

In fact, there is already talk of using another LTRO to bolster this policy and help stop any upward movement in rates, although given the limited impact of the initial LTROs (beyond avoiding a bank funding crisis) this may not help much.

All that said, the ECB is unlikely to drop its new communication approach in the near future, leaving Draghi the unenviable task of continuously restating the ECB’s commitment to this policy – expect this to begin in earnest at today’s meeting.