Some 17 million Germans – and, we dare to say, a record number of keen international analysts – tuned in yesterday to watch the first and last televised debate between Angela Merkel and SPD contender Peer Steinbrück, ahead of the country’s elections on 22 September.

The debate only briefly touched on the Eurozone crisis and EU policy, with Steinbrück criticising Merkel’s policy over Greece in particular. Though some Anglo-Saxon commentators have written this up as the SPD candidate “criticising austerity” , in fact, he was more criticising the pace of austerity and its balance with more ‘growth orientated’ policies – not austerity itself.

As we’ve argued before, you just don’t criticise Sparpolitik in Germany – next to plagiarism, this is the best way to end a mainstream political career. Steinbrück did, however, criticise the pace and scale of Merkel’s austerity policies, again repeating his calls for an as yet very vague new “Marshal Plan” for Europe. “There must be budget consolidation”, he said, but must not be “a deadly dose”. Merkel hit back, saying that if, as Steinbrück claims, the need for a third Greek bailout is a sign of her Eurozone policies failing, why did he and his party vote in favour of all the bailouts so far?

So who won the debate?

The view in the German media and commentariat seems to be pretty unanimous that though the debate itself was pretty much a draw, it involved a bit of a boost for Steinbrück – which wasn’t entirely unexpected, given that the man started from an exceptionally low base.

However, Steinbrück did see a boost to his head-to-head ratings. An ARD poll (see below) has a massive swing in favour of Steinbrück on the question: who would you vote for if the Chancellor could be elected directly? 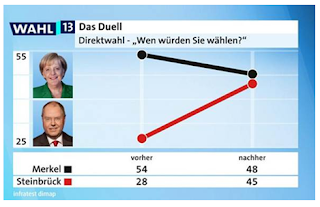 AnFG Wahlen poll for ZDF shows a much smaller swing for Steinbruck – but still a clear swing.

However, the real winner of the debate, according to many, was Merkel’s fetching patriotic necklace, which has now has its own twitter account with over 6,000 followers.