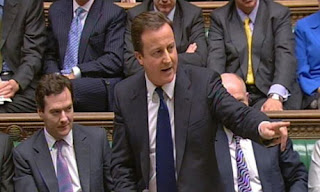 Europe has reacted with surprise – and a degree of shock – to David Cameron’s defeat in the House of Commons, which has de facto ruled out British participation in any potential military operation in Syria, at least for now. Here is a first round-up.

In an interview with Le Monde, French President François Hollande commented the outcome of the vote as follows,

Each country is sovereign [and can decide] to take part in a [military] operation or not. This is valid for the UK as well as for France.

Hollande suggests France could go ahead with or without the UK, and says,

If the [UN] Security Council is unable to act, a coalition will be formed. It will have to be the largest possible…It will have the support of the Europeans. But there are only few countries that have the capacity to inflict a sanction through the appropriate means. France is one of them. It’s ready [to act]. It will decide its position in close contact with its allies.

An editorial in Le Monde carries the headline, “The Commons vote against…Tony Blair”, and notes,

It’s the trauma of the Iraqi episode…that explains the ‘no’ of the British parliament to a [military] action in Syria. It’s not David Cameron…who has been defeated. Rather, he pays for Tony Blair – as Mr Cameron himself acknowledged during the debate.

As regards the international implications of yesterday’s vote, the article goes on,

Washington has indicated that the decision of the UK – the privileged ally, the one of the ‘special relationship’ – would not stop the US intervening. But [the UK’s decision] can’t not embarrass Paris – even though, officially, France’s position remains that it is impossible not to react to the use of chemical weapons.

The refusal of the British House of Commons to participate in a military strike against Syria has left Cameron badly damaged – and with him the ‘special relationship’ with the United States.

Die Welt‘s chief correspondent Michael Strümer stresses how, once again, when it comes to ‘hard power’ the EU disappears. He writes,

While all eyes are on Washington, New York, Moscow, and on Damascus, Ankara, Cairo and Jerusalem, awkward silence reigns in Brussels…In the corridors of powerlessness in Brussels you can sense frustration and little momentum.

Christian Zaschke of Süddeutsche Zeitung describes the vote as,

A political slap in the face of historic proportions” for the Prime Minister, adding that it will define his tenure…On the international stage, [Britain] will be taken less seriously.

In Denmark, the only other EU country that has signalled it might take part in a strike, political leaders have this morning signalled that the country remains committed – although Foreign Minister Villy Søvndal also warned that the UK vote “calls for reflection”.

When asked about the vote, Polish Foreign Minister Radoslaw Sikorski dodged the question, replying that it is important to have confidence in the UN inspectors’ evidence. Sikorski also suggested that a possible solution could be for Russia to secure the Syrian regime’s chemical weapons stockpiles – as the majority of them dates from Soviet times.

In Spain, an article in El País under the headline, “A blow to Cameron”, argues that, as a result of the vote,

The British Prime Minister sees his authority seriously dwindled and, in an unprecedented event in the country’s modern history, has lost control over foreign policy.

Paradoxically, Hollande, a French Socialist, seems to be the ‘hawk number one’. After securing a very prudent pension reform, he’s now trying to use strength against an ex colony inherited by the Turks to titillate the nation’s imperial pride – although Cameron’s defeat will lead him to take a milder stance.

We will keep updating the blog with any other interesting reactions throughout the day.