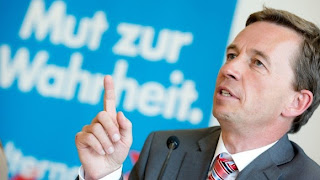 An interesting story caught our eye in today’s Welt concerning next month’s German elections. Bernd Lucke, the head of the anti-euro Alternative für Deutschland party (seemingly undaunted by a recent attempted assault on his person) has written a letter to German President Joachim Gauck asking for access to documents in which the German government has simulated different scenarios to save the euro, citing Germany’s freedom of information laws. The move fits with the party’s theme of “having courage for the truth” (Mut zur Wahrheit), which it accuses other German political parties of lacking.

This comes after the same request addressed to the Chancellery, Bundesbank and German banking supervisor Bafin was rejected on the basis that the information is held by the eurozone’s network of central banks, and therefore falls outside the scope of German law. Lucke has criticised such “questionable” behaviour on the part of German officials, while noting that the Bundesbank’s refusal to reveal the information shows that it is de facto supporting the German government when it should be a politically independent actor.

While we’re not expecting the information to become public soon, the documents would certainly make for interesting reading as they would reveal how the German government assessed the costs of a breakup, and therefore whether its subsequent policies for dealing with the crisis have indeed been ‘alternativlos‘ as Merkel has argued, or whether alternative policies were jettisoned due to the short-term political and/or economic implications.