Greece almost as worried about a third bailout as Germany…

As a follow up to our earlier post on the German reaction to the revelation of a third Greek bailout, we thought that it was also worth noting that there has been a fairly strong reaction in Greece as well.

As we suggested yesterday, the outrage over a third Greek bailout was unlikely to be confined to Germany, with the Greek themselves coming round to the cold realisation that this could mean many more years under tough bailout conditions. Many of the papers ran headlines expressing as much, with some including some rather ominous pictures of Schäuble… 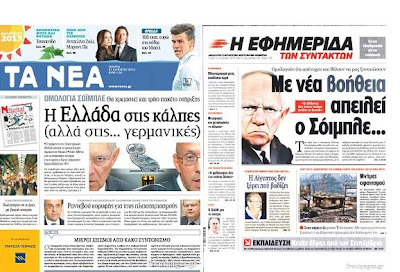 How much more austerity Greece is willing and able to stomach will surely be a big factor in any discussion on future aid. The one saving grace may be that this bailout, whatever form it takes, is likely to be significantly smaller than the previous two, potentially allowing for more flexibility.

That said, as long as Greek debt continues to look inherently unsustainable any easing of conditions may be just a pipe dream. With both sides already expressing concerns over the project, expect another fiery set of negotiations towards the end of this year.