Germany finally admits to a third Greek bailout, but what form might it take?

It seems the German government has finally publicly accepted what everyone already knew – that Greece will need some kind of further financial assistance after its second bailout programme expires at the end of 2014. German Finance Minister Wolfgang Schäuble told a CDU election rally yesterday:

“There will have to be another [bailout] programme in Greece,” in order to help the country “get over the hill” of debt repayments it faces.

Despite attempts from both the German Chancellor Angela Merkel and German finance ministry spokesmen to row back from the comments and suggest they are not, in fact, a change in stance, the remarks seem to have stuck.

Lots of questions to be answered then about the size and format of what may be the trickiest Greek bailout to date, given the tough political constraints and the on-going (very tenuous) premise of debt sustainability. An important consideration, as Schäuble suggested, will be to get Greece over its funding hump in the next couple of years (data from Greek debt bulletins): 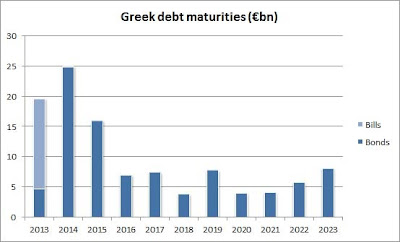 The final point to note is the continuing German aversion to further debt relief for Greece, something the IMF and nearly all private observers accept is necessary. Within Germany, this seems to be a result of the government ‘learning its lesson’ from the first Greek debt restructuring, which patently failed. However, the German government seems to be learning the wrong lesson for the wrong reasons – it was not that restructuring was a bad idea in itself, but simply that all such a large amount of debt was held by Greek banks that the ensuing recapitalisation and bailout negated any benefit.

The German government clearly remains loathe to discuss any such details, meaning a clear plan is unlikely to emerge until the end of the year. In the meantime, we can’t help but wonder how the Greek public will react to the prospect of another bailout with another set of conditions attached. Could the big unknown outside the eurozone begin to look attractive once again? Maybe, or maybe not – but it may well start to factor into their thinking at some point.