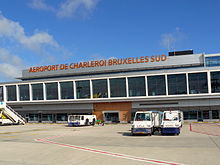 Nothing escapes the European Commission’s severe oversight. Not even April Fool’s day stories. It emerged over the weekend that the Commission’s Directorate General for Competition had sent the Belgian government a request for information about, among other things, plans to build a second runway at Charleroi airport.

Fairly standard procedure, except for one small detail. The plans for the new runway had been ‘revealed’ by Belgian news site PagTour in its April Fool’s day story this year. The funniest aspect is that, after a plausible start, the original article went on to offer a number of rather weird details, hinting at its true nature, such as:

But apparently none of these were wacky enough to stop the European Commission requesting information about the ‘planned’ new runway to the Belgian government, in a letter to which the PagTour article was attached as a reference.

Equally extraordinarily, before being passed on to Charleroi airport, the Commission’s letter (which Belgian daily L’Echo has published here) had reportedly gone through the Belgian central government and the Walloon regional government. Both failed to realise that the request for information on the second runway was based on an April Fool’s day story.

We can’t help but wonder what the Commission’s next investigation will be. Perhaps they could examine the Royal Mail’s use of owls (as reported by the Daily Mail on 1 April 2013). Surely some violation of animal welfare laws there…