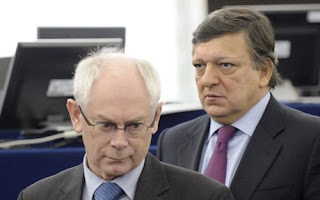 As the crisis in Egypt continues to intensify by the day, European Council President Herman Van Rompuy and Commission President José Manuel Barroso warned in a joint statement yesterday that the EU would “urgently review in the coming days its relations with Egypt” – including the new aid package worth around €5 billion that was pledged to Cairo last year.

EU member states’ ambassadors are holding talks today, followed by a meeting of EU foreign ministers on Wednesday. For the moment, though, Egypt’s new military-backed government does not seem very impressed by threats coming from Brussels. As Foreign Minister Nabil Fahmy put it,

“I want to determine what is useful and what is not and what aid is being used to pressure Egypt and whether this aid has good intentions and credibility. We are not looking to replace one friend with another but we will look out to the world and continue to establish relations with other countries so we have options.”

There is plenty of political posturing in Mr Fahmy’s words, but this kind of reaction inevitably raises questions over how the EU has handled its relations with Northern African countries over the past few years, particularly via the European Neighbourhood Policy (ENP).

In a report we published in May 2011, we stressed how, in the name of ‘stability’, the EU had consistently increased funding allocations for countries like Egypt and Tunisia, despite the European Commission itself noting limited progress on human rights and democratic reform over the years. In particular, we argued that the Commission’s reliance on so-called ‘budget support’ – whereby EU aid money is given directly to neighbouring countries’ governments and then directed towards specific projects by the latter – was clearly problematic, given the lack of transparency on how these funds were used.

The European Court of Auditors recently made a similar criticism in a tough report on EU aid to Egypt, where it suggested that the European Commission had been “too flexible” in assessing whether the Egyptian authorities were actually meeting the conditions for granting ‘budget support’. The Court noted that,

“The Commission and EEAS [the EU’s diplomatic service headed by Baroness Catherine Ashton] have not been able to manage EU support to improve governance in Egypt effectively. This was partly due to the difficult conditions they have faced in Egypt but also to shortcomings in the way the Commission and EEAS have managed their cooperation with Egypt.”

The recent events in Egypt add one further element of concern. Despite its generous funding (Egypt was initially allocated approximately €1 billion for the period 2007-13, around 60% of which via ‘budget support’), the EU seems to have failed to gain any significant leverage on the Egyptian establishment. Calls to stop the violence have been ignored – and the threat to stop the disbursement of aid has so far been openly snubbed.

This is of course a complex political situation and the circumstances are difficult, but given that the ENP is a very political aid instrument (seen by the EU as a tool to exercise its ‘soft power’), it is getting increasingly difficult to see what value it has added in the case of Egypt.