As has been widely covered today, the eurozone exited recession in the second quarter of this year, growing by 0.3% (over expectations of 0.2%).

We posted our thoughts on this expected ‘turnaround’ in the eurozone a couple of weeks ago, so we won’t rehash them. Needless to say the figures are a positive but there is still plenty of negative data around (unemployment, bank lending to real economy, consumer confidence), so European leaders should refrain from getting overexcited.

The key point for us remains this issue of divergence. It’s worth noting that Germany and France played a significant role in pulling the eurozone average growth up. There also seems to be a prevailing logic that German growth can play a big role in pulling the eurozone out of its crisis. As we have noted before we’re fairly sceptical of this idea for a couple of reasons.

There are two mechanisms through which German growth could in theory help boost struggling eurozone countries: 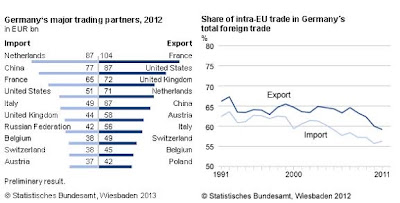 (Data up to end of 2012, however imports from eurozone countries have continued to decline in 2013)

As we have discussed before, and as the graph above shows (click to enlarge), German imports from peripheral eurozone countries have decreased substantially with only Italy featuring as one of Germany’s top ten trading partners. Furthermore, imports from other EU countries have declined to 56% of total imports – with the eurozone accounting for approximately 38% of this and peripheral eurozone states a small part of this.

Therefore, even if GDP and consumption are growing quickly in Germany it’s not entirely clear that this would have a significant knock on effect on the countries that need it most.  The Netherlands, France and Italy are the most likely to see some boost. The IMF itself noted recently that using fiscal policy to boost Germany GDP would provide limited help for the eurozone. It ultimately also depends where Germany’s economic growth comes from, if driven by its own exports or government spending the impact would be even further limited.

2. Providing space for the periphery to boost exports

The theory here is that Germany ‘reflates’ allow wages and unit labour costs to grow and focuses its economy more on domestic consumption and investment rather than exports. This allows for the other eurozone economies to step in and export more, not least because they look relatively more competitive. 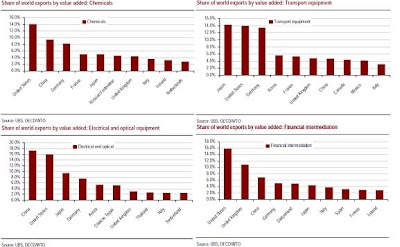 However, as the graphs above show (via UBS, click to enlarge), in many cases the struggling peripheral countries do not export the same goods as Germany (transport equipment, electrical equipment, chemicals), although there is some overlap on food and financial services. In any case, it’s far from clear that the struggling peripheral countries would be able to step into any breach left by Germany (particularly with heavy competition from emerging markets). Furthermore, many German exports used component parts from elsewhere in the EU, so decreasing them could actually have negative knock-on impact in certain sectors.

Another point worth keeping in mind is that a rapidly growing Germany would put added strain on the one-size-fits-all policy of the ECB. With the ECB now forecasting that interest rates will stay low for some time, if Germany continues along this growth path it may not be too long before the Bundesbank becomes concerned about the monetary policy being too lax.

It almost goes without saying that strong German growth is a good thing for the eurozone generally (breeds confidence and helps encourage investment) and strong economic growth should be the target for all countries. However, as the points above demonstrate, this does not mean it will be enough to drag the eurozone out of its crisis (i.e. it may be necessary but it is far from sufficient) and is certainly no panacea. The key issues to address remain the structural flaws in the eurozone and the lack of competitiveness within many of the peripheral economies.