Boom! Merkel opens up for the return of powers from Brussels 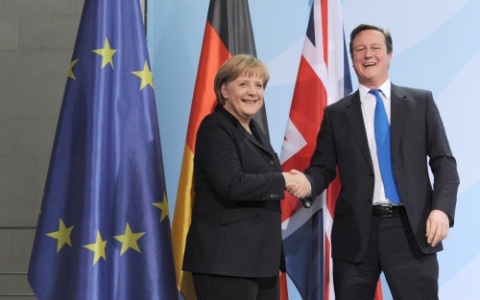 Well, here’s an essential development for those of us who think reform in the EU – including “less Europe” – is fully possible.

Speaking on an interview to Deutschlandfunk radio and Phoenix TV yesterday, German Chancellor Angela Merkel said decentralisation of powers from Brussels should be discussed once the German election is out of the way. Merkel said:

“I believe that in Europe at the moment we have to take care to coordinate our competitiveness more closely, and for that we don’t have to do everything in Brussels.

‘More Europe’ can not only mean transferring competences from national states to Europe, but you can also have ‘more Europe’ by coordinating national political actions more intensively and rigorously with others. So we discuss if we need even more competences for Europe.

However, we can also consider whether we can give something back. The Dutch are currently discussing this. And we will also have this discussion after the Bundestag elections. Or we can give more competences to the Commission in order to set agreements on specific issues with national states.”

We shouldn’t get overly excited – it’s only one statement – but this is the first time, to our knowledge, that Merkel has explicitly opened for the return of powers from Brussels.  This will clearly be welcomed in Whitehall.

Merkel’s comments come at an interesting time. Just this morning it emerged that the eurozone has finally emerged from recession. Is this when Merkel turns away from an inward ‘crisis containment’ policy, towards a reform agenda? This agenda would be  designed, in part, to keep the UK inside the tent (which Berlin wants for a number of reasons), and in part, to kick-start desperately needed reform for the EU to become more competitive.

What’s often lost on observers of this scene is that the two go together. As people in Berlin will tell you, Merkel is convinced that Cameron is one of the few EU leaders who understands the ‘global race’. He is seen an ally in ending Europe’s dependence on cheap cash (which is why the UK government simply has to stop lecturing the Germans on the need for turning the eurozone into a debt union).

As we’ve argued before,  the eurozone is unlikely to take the quantum leap towards more integration, after the German elections (as some still think).  However, a window of opportunity will open up for the UK and other reform-minded governments to come up some credible and concrete proposals for change. Berlin will no doubt be listening.

Also, the October European Council is likely to be a rare occasion when EU leaders won’t focus all their energy on solving the eurozone crisis – instead they can now turn to wider question of how to make the EU as a whole to work for growth and competitiveness.

Cameron has a massive opportunity here.

To temper stuff a bit. Merkel hasn’t turned into a Tory MP – she chooses her words on Europe carefully. Also, the comments did not make a splash in the German press at all. None of the major newspapers reported them – they were all rather more concerned about the on-going NSA scandal, and Merkel comments on that instead.

However, it would be a typical ‘Merkel coup’ to slowly, step-by-step, start rolling out a reform agenda in the EU, which – in a German way, wrapped in pro-EU rhetoric – would also involve less Europe.

This is getting interesting.