As we reported in today’s press summary, there were some interesting reports circulating in the Greek press this morning about Greek Prime Minister Antonis Samaras sending a letter to Russian President Vladimir Putin to request assistance with cost of Greek gas – namely the gas which Greece imports via Gazprom.

Looking at the data it’s clear why the Greek government is concerned about this: 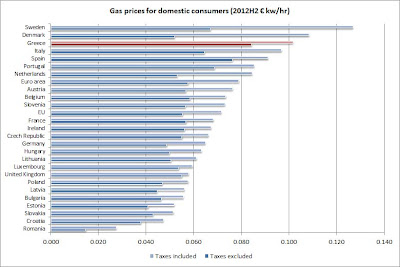 Even though the request may be understandable then, it treads on unsteady ground for the EU.

As we noted during the Cypriot crisis, Russian influence in the region (particularly in relation to energy) is a very dicey issue, which brings out conflicting goals in various EU member states.

Natural Gas Europe reported last week that negotiations between Gazprom and Greece have been on-going for some time but are at somewhat of an impasse with the former offering price reductions of around 10% and the latter requesting up to 20%.

Any favour on gas prices from Gazprom (via Putin) is unlikely to come for free. The EU (and the US for that matter) will likely be mindful of ceding further influence over an EU member to Russia, especially one in as strategically important position as Greece. Gazprom has also widely been mooted as the likely buyer of DEPA, the Greek gas monopoly which is being privatised, although it did refrain from bidding earlier this year. Still the prospect for increasing Russian presence in Greece and the Greek energy market is clear, while hope of Greece tapping into ‘vast’ reserves under the Mediterranean are still a pipe dream to a large extent.

All that said, its clearly early days and we shouldn’t get ahead of ourselves. But we’re certain other EU leaders will be watching this one closely.