What would leaving the EU mean for the UK’s services sector?

Our Director Mats Persson writes on his Telegraph blog,

The UK’s services sector accounts for around 75 per cent of the country’s GDP. Britain’s 0.6 per cent growth in the second quarter of this year was largely thanks to this sector, which grew at its fastest rate in over two years.

Whether we like it or not, the UK will remain a services-based economy for a very long time. So it goes without saying that as David Cameron looks to negotiate a new settlement with Europe, getting a good deal for the UK’s services sector should feature highly.

By far the most common argument from Better Off Outers is: “We sell more to them than they sell to us”, implying that the UK’s trade deficit would give London leverage to secure a favourable Free Trade Agreement in place of EU membership. It’s a persuasive argument. It is also simplistic. As the graph below shows (click to enlarge), the UK’s trade deficit with the EU is the result of a large goods deficit, while it is a net exporter of services. 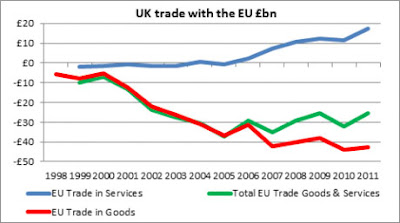 This is critical for several reasons.

Secondly, if you buy into the “trade deficit” argument, it follows that while Germany and others would have an interest in maintaining open markets for selling manufactured goods in the UK, this logic does not apply for services, where they are net importers from the UK.

Therefore, the UK would be vulnerable to tit-for-tat trade games in its key economic sector. Perhaps Germany would be so keen to continue selling tariff-free cars that it would happily offer market access for UK services firms as part of a new deal. However, it’s far easier to remove tariffs for goods than it is to eliminate the myriad of barriers that exist to market access in services. Despite 40 years of negotiations, the Swiss still have patchy EU market access for services, while the EU and US have spent decades trying but failing to agree reciprocal market access for certain types of funds.

Critically, there’s only one off-the-peg model offering full market access for services outside the EU – the Norwegian model (EEA) – which for a range of other reasons would be a bad deal for the UK. The other potential models – the Swiss, Turkish and WTO options – would restrict access for the UK services industry absent separate agreements for specific sectors. This also spells problems for the City of London, currently used by a range of firms as an entry point to the single market, often via a so-called passport (involving a firm being allowed to sell its services across the EU as long as it’s authorised to do so in one member state).

Again, given that the City is also a gateway to global markets for European firms, a deal might be struck. However, since “Anglo-Saxon” bankers and fund managers aren’t exactly universally loved on the continent, it’s also easy to see France et al blocking passport-style provisions for UK financial firms in perpetuity.

So, there’s a strong argument for the UK to remain a full member, not only of the single market in goods, but also in services. Now, this cost-benefit analysis could of course change. For example, if the many non-trade costs of EU membership aren’t reduced through fundamental reform; if the single market in services – which is under-developed – continues to be held up by protectionist interests; if the EU prevents the UK from taking advantage of growth opportunities from around the world; if Brussels continues to be more interested in restricting financial services activity rather than facilitating trade – then the case for fully remaining in the single market could weaken significantly.

Which is why another round of serious liberalisation of the EU services market is long overdue. Over to you, Berlin.