The IMF  released its latest review of the Greek bailout on Wednesday. As might be expected it was a bit more critical than the version released by the European Commission and ECB a couple of days ago.

As also might be expected the press has focused on the fact that the report reveals an €11bn funding gap for Greece between 2014 and 2016 (higher than that suggested by the eurozone). The report also calls for the eurozone to consider further debt relief for Greece. Neither of these revelations is brand new, with both having been included in the leaked version of the Troika report a few weeks ago.

There are a couple of other interesting points in the 207 page report, including some concrete forecasts on the shares of Greek debt. 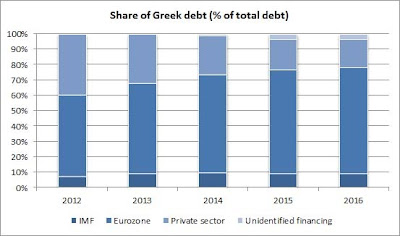 These amounts are pretty much as we predicted back in March 2012, where we forecast that by 2015 around 76% of Greek debt could be held by the IMF and eurozone (NB – it’s not clear how the ECB and national central banks holdings of debt [circa €40bn] are classified in the IMF figures. If they fall under private sector here, then the holdings by official creditors may well be higher in reality).

In any case, these amounts drive home that the real question facing Greece and the eurozone (after the German elections) is whether to write down these ‘official creditors’ or not – known as ‘official sector involvement’ (OSI). There will likely be a push to extend the loans further and cut their interest rates but, as the funding gap highlights, there are immediate liquidity and solvency questions facing Greece.

Other interesting points in the report include: