Colpevole: Supreme Court had bad news for Berlusconi (and the Italian government) 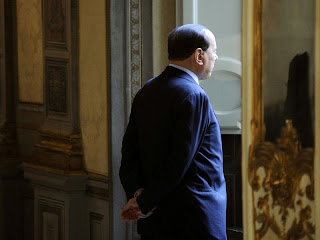 It took everyone a while to figure out what the Supreme Court final verdict in Silvio Berlusconi’s tax fraud case meant in practice. Let’s start from the easiest part: the four-year prison sentence has been definitively upheld. As we explained here, Berlusconi will only have to serve one year in reality – with house arrest or community service the most likely options, given his age.

The Supreme Court also said the five-year public office ban was excessive under Italian law and had to be cut down – so it referred it back to the Court of Appeal for review. In other words, it seemed Il Cavaliere had at least temporarily dodged the ban – arguably more important than the prison sentence from his point of view.

However, a new twist to the story emerged last night. Under Italy’s new anti-corruption law, which was passed at the end of 2012 by Mario Monti’s technocratic government, Berlusconi will not be allowed to stand for election for at least six years as a result of his tax fraud conviction. In practice, this means Berlusconi will not be able to run in the next Italian elections even if Letta’s government saw through the entire five-year parliamentary term.

But there’s more: Berlusconi also risks losing his seat soon(ish). According to the same law, the Italian Senate will have to vote on whether to expel Berlusconi with immediate effect. This vote will probably take place at some point in September – and will turn into a key test for the stability of Italy’s coalition government.

So, in substance, the lose-lose scenario for Italian Prime Minister Enrico Letta’s Democratic Party that we discussed here is materialising after all:

At some point Mr Letta will have to decide whether it is acceptable for his party and his electorate to stay in government with a party whose leader has just been convicted for tax fraud. Italy’s short-term political stability could also depend on the answer to this question.

Following the verdict, Berlusconi made a rather emotional statement. It was a political ‘call to arms’ for his supporters, with no mention of Letta or the future of Italy’s coalition government. Berlusconi insisted he is the victim of “judicial doggedness without equal in the civilised world” and pledged to “fight on”. We are pretty sure he will.