Did the EU instruct Rome to “unplug” Berlusconi? 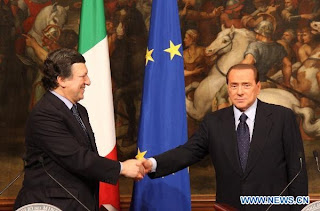 If true, this is quite extraordinary.

Fabrizio Goria – business and finance correspondent of the Italian online news site Linkiesta – has recently taken a look back at the Italian crisis towards the end 2011. An English version of the article is available on the LSE’s Europe blog. With Italian borrowing costs reaching record highs, he writes that European Commission President Jose Manuel Barroso instructed the then Interior Minister Roberto Maroni (of Lega Nord) to “unplug” Silvio Berlusconi, who was the Prime Minister at the time.

“In those dark days, with the 10-year Bund-BTP spread close to a historical peak, a unique incident occurred. During an institutional meeting, the then minister of internal affairs Roberto Maroni received a phone call. It was towards the end of October. People attending that meeting, a select group of associates, reported that he turned pale. The call came from José Manuel Barroso [who] was very clear with Maroni: “I don’t want you to take this personally. Neither you nor all other members of the government. But you need to “unplug” Berlusconi.” And in that moment Barroso revealed what the strategy was: a flurry of declarations against the then prime minister. From all fronts, from every European policy maker. The message to be sent was one and one only: Berlusconi is inadequate.”

It was extensively reported at the time that German Chancellor Angela Merkel and then French President Nicolas Sarkozy (who are obviously much more powerful than Barroso) were putting enormous pressure on Berlusconi to take a hike – and it was always assumed that Berlusconi’s departure was at least in part due to European pressure.

However, this would be the most explicit intervention known to date. Now, we haven’t seen this reported anywhere else – and given that it is evidence that the EU fell just short of toppling a democratically elected leader – we’d expect it to be all over Italian and international media.

So we take it with a pinch of salt – but, as always, we’re keen to know what our readers think…